The funeral for Abu Ghazi was held in Al Arrub camp today, and hundreds of mourners came to pay their respects. After the funeral, clashes erupted between Palestinians and Israeli forces and according to Ma’an News Agency, 8 young men were injured with rubber-coated steel bullets, receiving treatment on the scene. In addition, dozens of other Palestinians, among these women and children, were treated for severe tear gas inhalation. 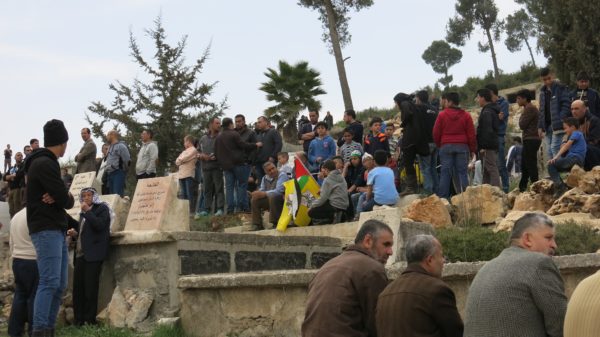 Hundreds of mourners paid their respects at the funeral.

Murad Yusif Abu Ghazi is be the thirteenth Palestinian to be killed by the Israeli army since the beginning of 2017. His death marks the second killing of a minor this year and once again highlights the excessive use of lethal force against civilians.

According to an Israeli army spokesperson, the killing happened after firebombs were hurled at passing vehicles on a road near Al Arrub camp and “in response to the immediate threat, forces fired towards suspects”. The spokesperson added that investigations are still underway. Statistics provided by Yesh Din, an Israeli organisation of volunteers for human rights,  however demonstrate that criminal investigations into alleged offences committed by Israeli forces against Palestinians have a poor chance of being effectively investigated. According to Yesh Din, only 4 cases out of 186 criminal investigations in 2015 resulted in indictments.