Abdullah Abu Rahmah was released by an Israeli military judge on Tuesday night the 24th of January after being arrested when he attended a court hearing. He had been home for 24 hours when at 1AM Thursday the 26th, thirty masked, armed soldiers surrounded his house, pushed open his door, and raided his home. 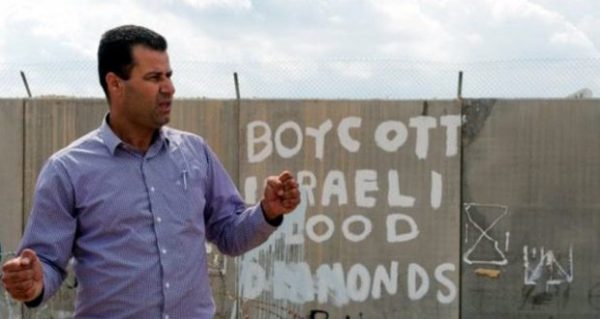 Abdullah, his wife Magida, and their four children had their phones taken away and were forced into one room, where they were held, as soldiers went through their belongings and ransacked their home. An hour later the soldiers left with Abdullah’s laptop. Abdullah’s brother, Rateb Abu Rahmah’s, apartment in the same home was also raided.

Abdullah was arrested On Monday the 23d of January when he showed up for a hearing in Ofer military base to attend the trial of Ahmad Odah, Khaled Ektishat, Mohammed Khatib, Akram Khatib, Lama Nezih and Jameel Barghouti.  These Palestinian activists had been arrested during a non-violent protest of Israeli plans to annex the Maale Adumim colonial settlement, which took place on Friday the 20th of January. They had all been released after being imprisoned for four days. The soldier, who was supposed to be translating the proceedings of the military trail, notified Abu Rahmeh that he was detained. Abdullah was handcuffed and leg shackled and taken to Maaleh Adumim colonial police station.

In 2010, Abdallah has been arrested 7 times and served 16 months in prison after being convicted on charges of “incitement” and “organizing and participating in an illegal demonstration”. Abdullah continued to advocate for nonviolent action and Human rights from prison.  During Abdallah’s imprisonment Catherine Ashton recognized Abu Rahmah as a Human Rights Defender,

The computer of another nonviolent activist from the Bil’in, Ashraf Abu Rahmah, was confiscated on 21.9.2016 when soldiers raided his home and has since not been returned. His wife Rana Abu Rahmah was home alone, as Ashraf works during the night, when soldiers forced their way into her home.   Ashraf, was shot on camera while he was blindfolded and handcuffed in 2008, the Israeli press reported last week that, Omri Borberg the commander who gave the order to shoot him has been promoted. Two of Ashraf’s siblings Basem and Jawaher were both killed in separate incidents nonviolently protesting the illegal wall constructed on their land. Ashraf himself has been wounded and arrested repeatedly including an arrest in 2011 when he was imprisoned for 8 months.

Bil’in is a symbol of creative popular resistance to the Israeli annexation wall and settlements. The village waged a successful campaign which resulted in their winning back half of their agricultural land that would have been separated from the village by Israel’s apartheid wall. “Israel is not a democracy. It is not ruled by laws. It is a criminal occupation that is ruled by force alone”, said Ashraf. Abdullah stated:, “In the last twelve years the occupation has used many methods including, killing and injuring, raiding our homes in order to stop us from exercising our right to protest and struggle against the occupation. But we will not stop struggling until the occupation is dismantled.”