After a good day comes a bad day

On 7th December 2016, Israeli forces at Shuhada checkpoint in occupied al-Khalil (Hebron) detained a group of teachers from nearby Qurtuba school, and then in collective punishment closed the checkpoint to everyone. Just after the teachers were finally allowed to reach their school, the Israeli occupying forces detained a father with his young son who were trying to reach a hospital for medical treatment, and in the end denied them to pass.

Teachers from the Qurtuba school are forced to go through the Shuhada checkpoint every day in order to reach their job.  On this particular day, the soldiers who are permanently stationed there, refused eight teachers to get to their students, holding them for more than 1.5 hours.  Qurtuba school, thus, had to start their day with the majority of the teachers absent.  Not only are teachers and students at the whim of the occupying army as to when and how they commute, they also have restricted access to the staircase connecting Shuhada Street with the school during school hours. The actual staircase leading to the school has been closed by Israeli forces as part of their attempts to ethnically cleanse Shuhada Street. 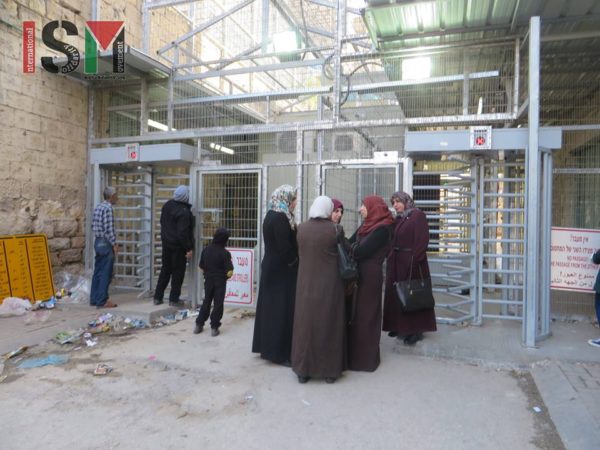 The teachers refused to leave and give up.  Instead, they waited outside the checkpoint demanding to be allowed to reach their school.  Israeli forces in an act of collective punishment closed the checkpoint, denying anyone else to pass. Thus, residents were stuck outside the checkpoint as well, adding to the number of people attempting to reach their homes or school. A man asking the soldiers to allow him to pass was told by the soldiers, that he could only pass if the teachers leave. Finally, after more than 1.5 hours, the teachers were allowed to pass, except for one female teacher, whom they kept inside the checkpoint box, claiming that she was not a teacher. The director of the school countered that she was recently updated to the list, and that the soldiers clearly missed adding her, and in the end, all the teachers were allowed to pass. This kind of arbitrary detainment of teachers, and at times also school-students, is not new to the Qurtuba school. 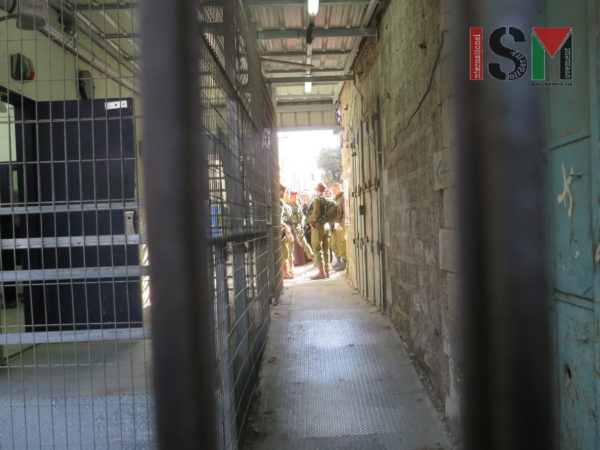 Israeli forces discussing with teachers, seen from the other side of the checkpoint

One man trying to pass during that time kept telling the soldiers that he just needed to bring several kilos of rice home.    Soldiers told him that he’ll have to wait till the situation with the teachers is resolved, and that “you have a good day, you have a bad day”. When he was finally allowed to pass once the teachers were gone, one of the soldiers, (first making sure that the Palestinian would not understand), insulted him in Hebrew calling him a ‘son of a bitch’.  When the man complained to another soldier, he was told to leave.

After that, Israeli forces detained a father with his son, as they were trying to reach a nearby hospital. The man lives in this area, and passes this checkpoint daily without any problems. On this day though, Israeli forces decided that his name is not on their list of ‘registered Palestinian residents’ – meaning that he was not given a number, which would allow him to pass. Therefore Israeli forces kept him waiting with his son, locked up in the exit of the checkpoint, with the turnstile locked, even after the man explained to them that he was taking his son to see a doctor. In the beginning, soldiers said that ‘there’s no hospital’ in this area and they don’t know a hospital there. Even when the man showed them a paper of the hospital, they would still not allow him to pass. When approached by internationals, the occupying forces insisted that they were ‘doing everything they can to let him pass’, while keeping the turnstile, that would allow him to pass, firmly locked. Israeli forces furthermore were adamant that they were not denying the boy medical treatment, as he would get it – eventually.  Instead of asking whether his treatment was urgent or not, the soldiers deemed themselves qualified to decide this.  They firmly insisted, that they can’t let him pass ‘yet’.

In the end, the boy and his father were denied from reaching the hospital, as one of the soldiers blamed the father, stating that it’s the father’s fault for even bringing his son to the checkpoint, rather than going another way.  This other route, that he was speaking of, was the longer and more expensive way around adding about 20 minutes to his trip.   This is a ridiculous attempt to move the attention from their lack of consideration for even allowing children to reach a hospital. This is a place where an occupying army can put the fault on the civilian (who thus far had no problems ever passing this checkpoint) bringing his sick son on the quickest way possible to treatment.  This then leaves the occupied population in the hands of a force that can determine their needs and lives.  In a city where every Palestinian is at the pure mercy of the occupying forces, expecting even the tiniest bit of humanity to be extended to them – futile.