It has been confirmed that Jihad Mohammad Khalil, 48, was shot and killed by Israeli soldiers at Qalandia checkpoint early Tuesday morning, 22nd November. Khalil is from Beit Wazan village, west of Nablus in the northern part of the West Bank. He was shot on the spot by an Israeli soldier, according to the Palestinian Health Ministry. A spokeswoman from the Israeli Police claims that the man was approaching a security guard welding a knife and so he was neutralized, while another spokesperson says that he was attempting to stab Israeli security forces.

So far there has been absolutely no evidence shown to prove these claims. No soldiers were hurt during the incident and no other injuries reported. After he got shot, Jihad Khalil was left to bleed to death by the soldiers, as they would deny access to the medics rushing to give first aid. After the killing, the soldiers shot down the checkpoint and prevented the Palestinians from crossing into illegally annexxed al Quds (Jerusalem). 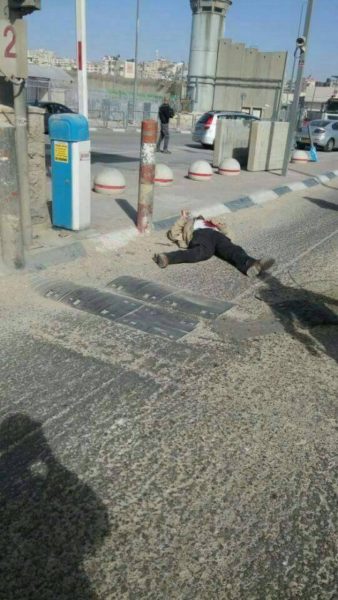