Palestinian Committee for Breaking the Siege

Yesterday the Palestinian Committee for Breaking the Siege organized an event in Gaza’s port in order to welcome the two boats that left a few days ago from Barcelona and intend to break the siege in the coming weeks.

Adham Abu Slimiya thanked those women for reminding the world about the suffering of the people of Gaza. He also reminded that since the last aggression the pain of Gaza’s population hasn’t decreased, as even the reconstruction hasn’t taken place yet. He also invited all human rights associations and all those who care about freedom and human rights to support and protect those women so they can arrive safely to Gaza.

On the same line spoke Mona Skeik, who thanked each one of these persons and asked for the protection of the boats by the international community, reminding of what happened with the Mavi Marmara. She reminded that women, men and children of Gaza are dying slowly because of the blockade, which she said is clearly a crime against humanity. For that reason their efforts are really appreciated. 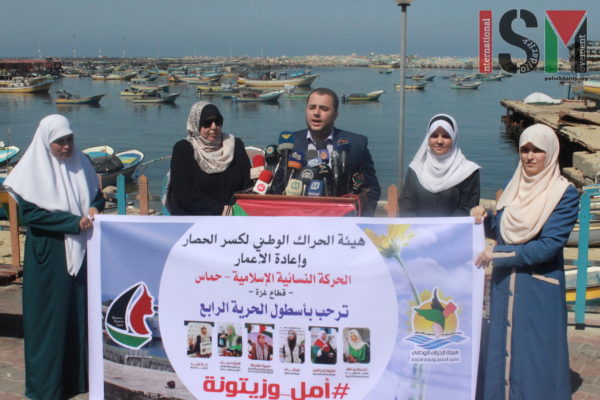