Beit Ummar, a small town outside of Hebron, has a population of just 18000 people, around 200 of which are imprisoned, with 6o of those being below 18 years old. These children are often in administrative detention for over a year without charge and repeatedly the police seem to be arresting all the males of one family at a time, creating both an economic and traumatic disaster for the family. Many of these young adults have been forced to take their exams in the prison, and these long-term incancerations have been effecting the mental health of many children in the area, whilst also seriously detrimenting their chances of a good education.

The Awad family have been especially targeted by the police due to their houses location close to the checkpoint. For many months both of their 2 young sons and the father were in prison, leaving the mother to run the shop and house alone. One night in October 2015 they were all arrested for ‘throwing stones’ and taken to a military centre where the father was blindfolded and hit with an army vechile, subsequently spending 2 days in hospital before being moved to his prison cell. For their youngest son Muhanned it was his third time in prison after being arrested when he was 13,15 and this time 17 years old. Having experienced extensive physical violence by the military when he was 13, which led to a court case against the militairy in the Israeli supreme court, his family only wish to see him safely away from army harrasment. Having payed huge amounts of money (5000 shekels) for the father and elder son’s release this month, they still wait for their youngest son to be released from prison. Despite being released, the military has visited the house 3 times this month, forcing the father to accompany them to the investigation centre, each time leaving the family fearing for a subsequent arrest. 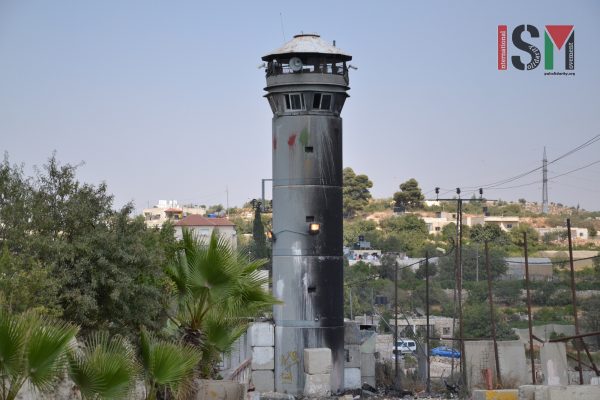 Whilst Doctors Without Borders and the local authority are trying to help the young men leaving prison through therapy and education programmes, the reprecussions of these arrests are haunting this small town. The weekly protests in Beit Ummar, which is surrounded by a large cluster of illegal Israeli settlements, seems to have spurred the army into arresting local families living near the demonstration point, despite these families absence from any demonstration. The influence of the militairy and settlers on so many aspects of village life from water shortages, to attacks by settlers accompanied by the high imprisonment rate has increased tension and despair within the village.

The arrests of these young men have serious consequences on their lives and their family’s and their treatment in prison often violates international law, it is clearly time for the Israeli authorities to be accountable for their illegal treatment of these young Palestinians.