When Aziz ‘Aasee, the mayor of Qarawah Bani Hassan village drives through the streets, we’re stopped every few meters by one of his constituents, all of whom are asking the same question: When will we have water again? For some, the question is a joke; they are used to going without water for days, weeks, or even months each summer. Others are more aggressive, and the question comes off as a threat. People are looking for someone to blame for their thirst. The mayor, who is responsible for paying the town’s water bills, seems like an easy target.

In reality, there is little Aziz can do to ensure that his town has enough water. The village shares a water access network with two other municipalities, Sarta and Biddya. The three villages, with a combined population of approximately 30,000 people, depend on one 8 inch pipe, designed to deliver 145 cubic meters of water per hour. During the winter months when water tables are higher, the water flows at full capacity, ensuring coverage to the entire network. However for the past two months, the amount has been restricted to between 50 and 70 cubic meters per hour. With such a small amount in the pipes, the pressure is too low for the water to reach many of the houses at the end of the system. Qarawah, which sits at the highest elevation out of the three villages, suffers the most from the low water pressure: no house in the village has received water in over a week. The most remote properties have gone dry for over a month. 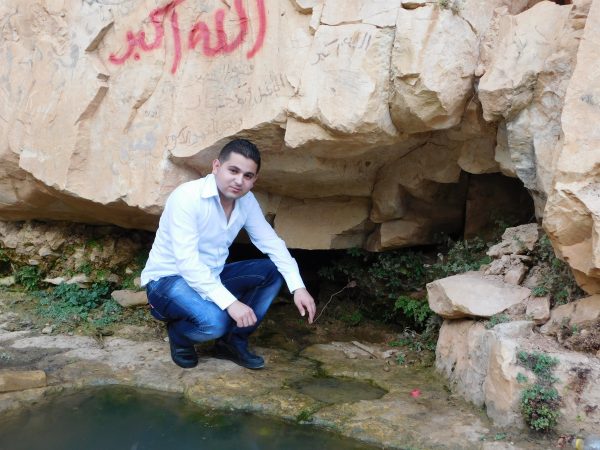 Mekorot, the Israeli national water company which ostensibly owns the water infrastructure in question, and controls 87% of the aquifer located inside the West Bank, lies at the root of the problem. Since 1982, when the Israeli military sold their control of the West Bank’s water resources to Mekorot for a mere Shekel, the company has become the main enforcer of water apartheid between the Palestinians, and Israelis living in illegal settlements. While settlements enjoy a 24/7 supply of water year round, Mekorot caps its supply to Palestinians at the levels stipulated in the Oslo agreements over 20 years ago. Since then, the population of the West Bank has grown exponentially, and almost no improvements to Palestinian water infrastructure have been made. The Israeli military administration in the West Bank only makes matters worse. They routinely deny permits for new wells and pipes that would benefit villages like Qarawah by providing alternative sources of water or improving water pressure. In addition, the Israeli military has demolished 50 water and sanitation structures owned by Palestinians in 2016 alone. The result is that Palestinians have essentially no control over any of the water within their borders, or the infrastructure to deliver it.

Negotiations with Mekorot are almost impossible for small municipalities like Qarawah. Officials in the district capital of Salfit have spent the past two months trying to persuade the Israelis to increase the water supply without result. Even on the national level, appointees from the Palestinian Authority have refused to negotiate with Mekorot and the Israeli military administration. Aziz, for his part, chiefly contacts Mekorot through one of their Palestinian employees, and the communication is confusing at best. The representative will promise to show up on a certain day, and then never arrives. Or he’ll leave an update to say the water supply will be increased for one night to 100 cubic meters per hour, enough to ensure that at least some homes in Qarawah will receive water, yet the taps remain empty. Meanwhile, the illegal settlement of Kiryat Netafim, easily visible on a neighbouring hillside, boasts green lawns. It’s clear from a glance that the settlements are receiving more than adequate service from the same company.

A few times over the past weeks, the municipalities of Qarawah, Satra and Biddya have called for popular protests, gathering at the meter access point for their shared pipe. Small groups of children and young men beat empty water bottles with sticks and shouted “Bidna may, bidna may” – “we want water” – at passing cars. Regardless, many in the three towns are afraid of a backlash from the protests. Shortly after the protests, armed Israeli soldiers arrived at the meter, demanding that the organizers cancel, or face repercussions. While it’s unclear what sort of consequences might be imposed, some worry that the water might be cut off completely as an act of collective punishment. 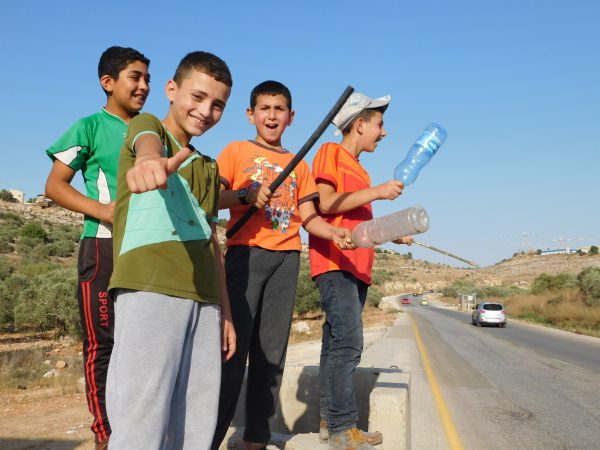 “Bidna may” – we want water protest

With no solution in sight, the villagers of Qarawah are finding ways to mitigate the effects of living under water apartheid. Villagers are using bottled water for drinking and showers, and hauling water up from local springs, located 4-6 kilometres outside the village limits, to use in toilets and irrigation. The springs also provide a small amount of potable water. However, this is not nearly enough to meet the village’s needs. Some houses in the village also have private wells; but with the summer stretching ahead, these limited resources are sure to be depleted far too soon. So until Mekorot is disbanded, or agrees to give equal service to Palestinians, the people of Qarawah will continue to suffer.