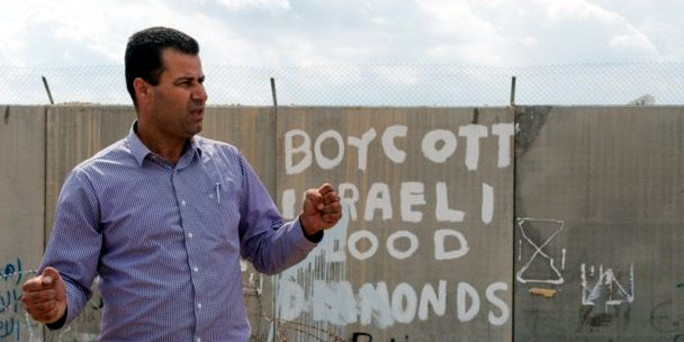 UPDATE 23d of May 2016: Abdullah was released from military prison on the evening of the 22nd. He must return to military court on the first of June for a hearing of the appeal of the military prosecution against the decision to release him.

UPDATE 19th of May 2016:  Abdullah Abu Rahma remains in Detention. A military judge ruled that Abdullah can be released on 15,000 Shekel bail but postponed this until Sunday the 21st of May at four PM to give the military prosecution a chance to appeal the decision.

Abdullah Abu Rahma remains in Detention. The military prosecution has appealed yesterday’s decision by the court judge at Ofer to release Abdullah, a decision which was made after a video was presented which shows that Abdullah was arrested and beaten while protesting non-violently. The military prosecution were granted an extension to Abdullah’s detainment until tomorrow when there will be another hearing. This will be confirmed by the court tomorrow by 5pm.

On Friday the 13th of May 2016, the internationally recognized human rights defender and coordinator of the Bil’in popular committee against the wall and settlements, Abdullah Abu Rahma, was arrested during the Alwada Cycling Marathon, which took place in the West Bank Friday. Abdullah Abu Rahma is currently still being held under detention by the Israeli military and his case will be brought to the military court in Ofer Military Base tomorrow.

Abu Rahma, who is from the West Bank village Bil’in, was arrested, after the Alwada Cycling Marathon had reached Bil’in. After reaching Bil’in the attending cyclists where met by approximately 150 heavily armed soldiers, who immediately started showering the cyclists with tear gas and blocked the road, where their route was going. Doing this attack of the peaceful demonstrating cyclists, Abu Rahma was arrest along with an international activist from Israel. The Israeli activist was released shortly after her arrest.

The Alwada Cycling Marathon’s intention was to demonstrate against the illegal Israeli occupation and the apartheid system, that Israel is enforcing on the Palestinians through a healthy and peaceful cycling route from Ramallah to Bil’in. By Israeli Forces attacking the peaceful demonstration and arresting Abu Rahma, they once again show the world, that they do not accept the right to protest peacefully and that they do not apply to the international law, that does not allow Israeli Forces to be on Palestinian controlled areas, which the area of Bil’in is.

Abu Rahma is an important activist for the village of Bil’in and a symbol of peaceful resistance all over the West Bank. For now, he is left waiting for his next sentence, after he has already been imprisoned for his non violent resistance multiple times, and has in the past been charged with both “incitement” and “organizing and participating in an illegal demonstration”. Till now, there has not been declared a charge against him in the current case, but the military court will determine his faith , after having hold him in detention for 4 days, even though he did not commit any crime what so ever.

Please spread this message as wide as possible and put pressure on the Israeli Justice system for his release through media attention or presence in the military court.

To hear more about the case, and get further information and updates, please contact us by email.