The 12th of May 2016 notes the day Israel calls Independence Day. For Palestinians, Israeli Independence Day means the start of the Naqba in 1948 (the Catastrophe) and the loss of their homeland, which is still ongoing today. 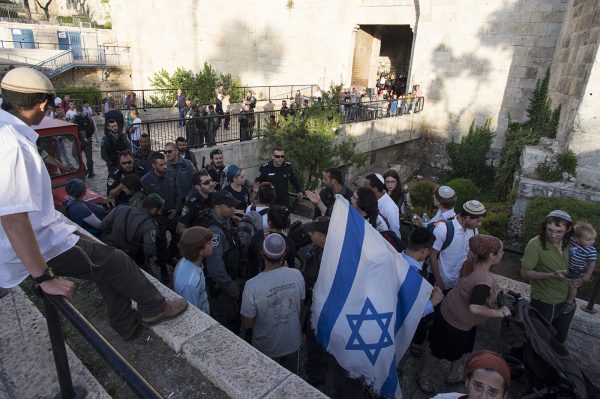 The small but highly provocative group of settlers at Damascus gate. Photocredit: ISM

We had traveled to Jerusalem and had expected a big march of Israelis waiving flags and chanting nationalistic slogans. Last year hundreds, if not thousands, had marched down to Damascus gate on their way to the Western Wall, provoking the Palestinian population in East Jerusalem. Although we did see some flag waiving and heard shouting, we saw no big crowds. As it turned out, the size of the Israeli march was of little importance. The small group of young provocative right-wing Jewish extremists that did come, succeeded in creating mayhem in front of the city wall; sparking anger which resulted in three Palestinians being beaten up by border police, arrested and taken away. A few of the Israeli extremists were also arrested for attacking Palestinian onlookers including children, and fighting with the police- although not until after the events had unfolded and the three Palestinians had already been arrested.

The group came down from New Gate loudly calling for the destruction of Al Aqsa and the building of the third temple, as well as shouting insults to local Palestinians. Border police surrounded them and tried to prevent two of the Jewish extremists from entering the gate. Although border police did attempt to push some of the settlers away most of the group- especially the women who had brought babies with them to this provocative and hateful display on Palestinian land (likely in an attempt to prevent anyone getting close to them; either Palestinians or police) – were allowed to go very close to the entrance of the old city. There they tried to block Palestinians from entering and exiting, continued their provocative shouting and started pushing people. The many border police and soldiers did nothing to stop this behaviour; they only kept them from entering the city and ensured they were not hurt. 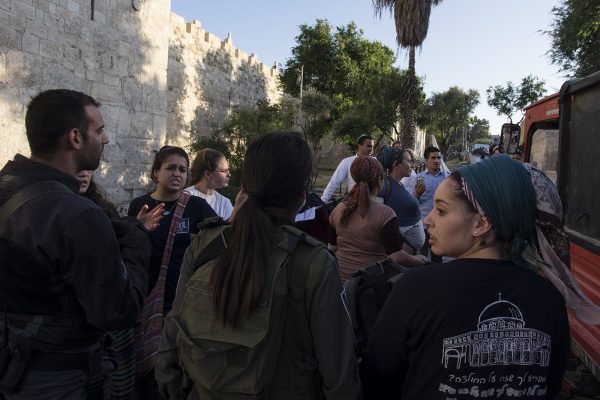 After some time of this going on, all of a sudden we hear an angry voice calling out in Arabic and see a young Palestinian moving quickly into the centre of the crowd. Before we knew it, border police had surrounded the young man, and pushed him to the floor. About ten police men and soldiers started kicking him violently, over and over again. We feared for the young man’s life, as many other young Palestinians have been killed by Israeli forces for less, but luckily the crowd of people may have prevented the police from using weapons. Finally, they got him on his feet but continued their violent treatment as they put him in handcuffs. While this struggle was going on, two other young men who had likely come to the aid their friend, were put on the floor and violently attacked by soldiers and police. The three were arrested on the spot, but they were not carrying weapons of any kind and had merely reacted to the ongoing abuse hurled at them. 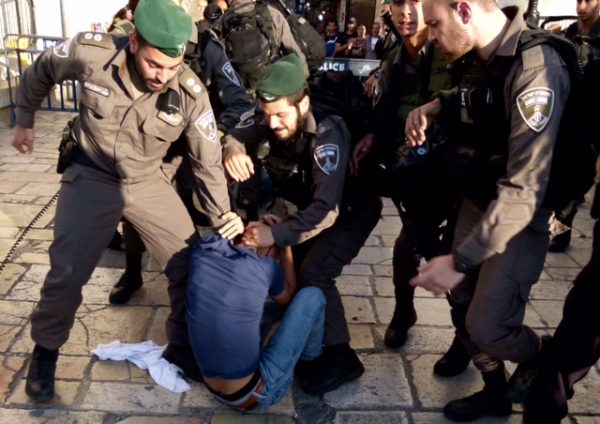 One of the young men attacked by border police. Photocredit: ISM 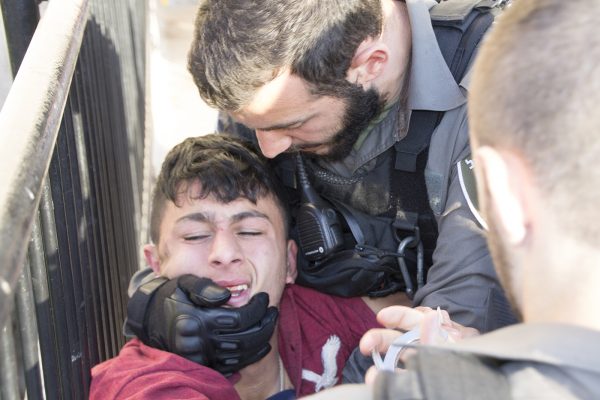 The boys, who were all bruised from the ill treatment by the Israeli forces were not offered any medical assistance. Instead they had to sit and wait for some time by the scene, where the group of young Jewish settlers continued their provocations and calls for the destruction of one of the most holy places for Muslims- Al Aqsa. Then the three were taken taken to waiting police cars, body searched and driven away. We also saw a couple of the Israeli extremists handcuffed and led away to police cars, however they were not subjected to any body searches. The events unfolded in less than 40 minutes, but it was a stark reminder of the system of apartheid that operates in Israel, and in occupied Palestine.

The treatment of the instigators who are Israeli and Jewish, was vastly different to the treatment of the young Palestinians, who are Muslim, reacting to their provocative and aggressive behaviour. Where Israeli Jews were coaxed and pushed, the Palestinians were subjected to extreme violence from the police and soldiers, and arrested straight away. Palestinians are also likely to face significantly harsher punishment for any wrong doing, punishments are often also extended to their families. Israel, it seems, can not see that there is anything wrong with operating an apartheid system as they so blatantly showcase how different groups are afforded different rights and treatment. How long are we going to let them get away with this?