Abdullah Abu Rahmah to be Charged at Ofer Military Court

The prosecution have until Sunday the 22nd of May at 4pm to appeal the military Judges order to release Abdallah Abu Rahmah. They are expected to do this and there will likely be retried tomorrow at Ofer Military Court .

The military trial of Human rights defender, Abdallah Abu Rahmah, today, Thursday the 19th of May, 2016 will take place in the afternoon at Ofer military Prison.

Charges are likely to be brought against Human rights defender Abdallah Abu Rahmah from the West Bank village Bil’in. Abdallah was arrested from the Al-wada Cycling Marathon when the marathon reached Bil’in and the cyclists were met by approximately 150 heavily armed soldiers. The soldiers immediately started showering the cyclists with tear gas and blocked the road, where their route was going. During this attack of the cyclists, Abdallah was arrested along with an Israeli demonstrator Israel. The Israeli was released shortly after her arrest.


The military prosecution is expected to request that 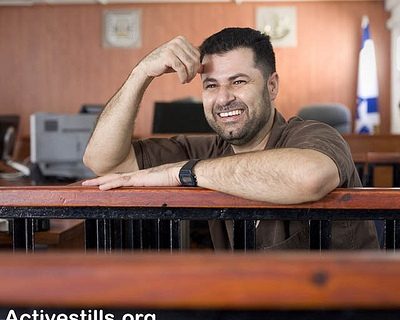 Abdallah, who has been held in detention since Friday the 13th of May, remain in detention until the end of proceedings against him.

Abdallah has long promoted the use of peaceful means to raise international awareness about human rights violations suffered by Palestinians due to Israel’s illegal wall and settlements. His case illustrates a pattern of the Israeli authorities targeting and harassing those who stand up for their rights using peaceful action in support of Palestinian victims of human rights violations.

Bil’in is a symbol of creative popular resistance to the Israeli annexation wall and settlements. the village waged a successful campaign which resulted in their  winning back half of their agricultural land that was confiscate from them  by the Israeli authorities. Two siblings from the Abu Rahmah Family, Basem and Jawaher were both killed while protesting nonviolently the illegal wall constructed on their land. .

After seeing footage of Abdallah’s violent arrest , a military judge ordered his release on Monday, and instructed the police to forward the case file to the internal affairs unit, as he believed the arresting officers were lying in their description of the events and acted with intentional violence. However the military prosecution successfully appealed this decision. During the appeal hearing the military prosecution referred to the non-violent Al-awda cycling marathon, from which Abdallah was arrested, as a “riot” and referred to Abdallah as a main “instigator”. In addition, the prosecution mentioned several times that they intend to question Abdallah over posts in his Facebook page, though they did not give any details over which posts or of what nature.

In 2010 Abdallah served  16 months in prison after being convicted of charges including “incitement” and “organizing and participating in an illegal demonstration”. In Oct 2014 he was convicted for  “obstructing a soldier in the line of duty”,after he stood in front of military bulldozers during a demonstration at the Bitunya checkpoint in the West Bank in May 2012. Abdallah received a four-month suspended prison sentence for the next three years  and a fine of about US$1,300. on 23 February 2015. A sentence the military prosecution would now want to see activated.

During Abdallah’s previous imprisonment Catherine Ashton recognized Abu Rahmah as a Human Rights Defender and The Elders called for his immediate release, calling him a prisoner of conscience, as well as Human Rights organizations such as Amnesty International or Frontline Defenders.  Diplomats from Spain, Malta, UK and EU representatives have attended his trials and the Spanish parliament issued a statement expressing their concern over Abu Rahmah´s incarceration. Ronnie Kasrils, former Govt Minister of post-apartheid South Africa has declared his support for Abu Rahmah, saying “It is so important to show in various ways support for the just Palestinian cause of which Bil’in village and  Abdallah Abu Rahmah, are so symbolic.”