Apartheid in the fields: Part 1 Gaza: farming under siege

A new report from Corporate Watch outlines exactly how the food grown in the illegal settlements of Palestine gets to our plates in Britain, and what we (in Britain) can do about it. The situations in Gaza and the West Bank are quite different so our summary here for ISM will look at it in three parts. Today:

The Israelis evacuated direct occupation of Gaza in 2005 but its control over that tiny strip of land remains almost total. Israel controls borders and with it all imports and exports. The effect on the Gazan economy has been calamitous. A buffer zone agreed in the 1990s under the Oslo accords has expanded until it covers over a third of all agricultural land, and exactly where that zone lies is unclear and changeable. Closest to the border farmers risk being shot at and further away land and crops may be destroyed. Over fifty farmers have been killed in the buffer zone, thousands of farms, nearly a thousand houses, mosques, schools and water wells have been destroyed. But farmers must continue to farm to make a living and to hold on to the land.

What cannot be sold in Gaza is largely waste: Israel only allows a tiny proportion of Gazan food produce to be exported, and that through Israeli companies.

Gazan farmers are calling for a boycott of all produce exported through Israeli companies although they know it will initially harm their livelihoods even more: ‘The Israeli occupation allows us to export a small quantity of produce, just to show the world that they are nice to the Palestinians, but they are using us. Everything they do is controlled by them,’ says Sa’ad Ziada from the Gazan agricultural union, UAWC. 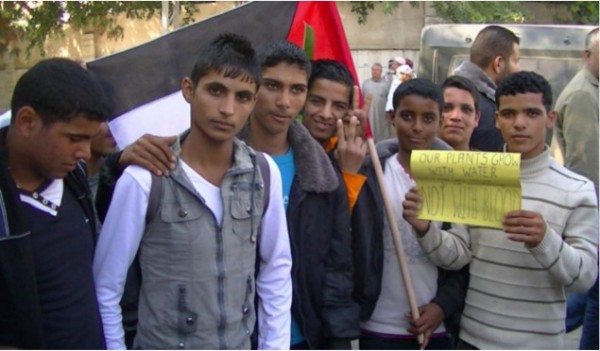