24th January 2016 | International Solidarity Movement, Tulkarm Team | Jin Safoot, occupied Palestine
In the early morning, 18th January, hundreds of Israeli soldiers entered the Jin Safoot village to demolish a farmhouse belonging to the Palestinian farmer Faed. The barn was serving as a shelter for his animals and he wasn’t allowed to remove all of them before the Israelis demolished the roof. Faed claims that two of his sheep died after being smashed underneath the falling roof. 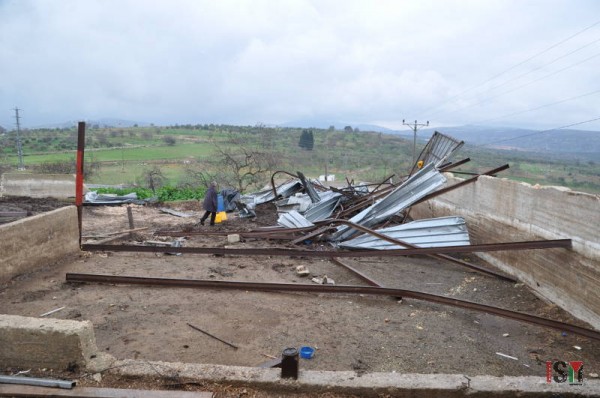 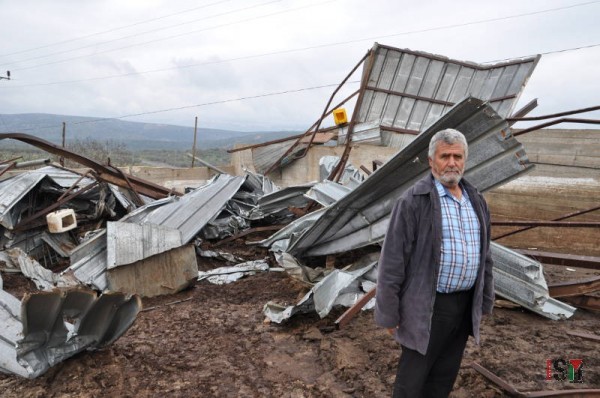 Faed in front of his barn. Photo credit: ISM

Israeli soldiers shot two of the family members while they were trying to stop the ongoing demolition. One of them was hit by a live bullet in his left hand and the family now fears that he won’t regain full strength in one of his fingers. Another family member was peppersprayed and arrested on the scene. He is now being imprisoned in a Israeli military base in Huwwara, West Bank.

Faed and his son who was shot in his hand. They are standing on top of the house the IOF demolished in 2007. Photo credit: ISM

Faed’s farm is located in Area C. Roughly 60% of the West Bank is under complete Israeli control since the Oslo accords in 1990’s. To be allowed to build a house in Area C you have to get a permission from the Israeli authorities. These requests are often denied and at the same time farmers are likely to face demolition if they construct a building without Israeli permission. According to the Israeli NGO Peace Now, the Israeli Civil Administration denied 94% of the applications between 2000 and 2007.
In 2007 Israeli soldiers demolished another building belonging to Faed, also located in Area C. For the six previous years Faed has worked hard to build a new home for him and his family and the destruction came as a shock. The recent destruction of his farm house is yet another setback for him, mentally as well as financially. To be able to rebuild his barn he now has to sell parts of his land. If he does rebuild, it would still be under constant threat of Israeli destruction.
Demolition farm jin safoot Tulkarm 2016-01-24
ISM Media