A year and a half after the last massive assault on the Gaza Strip the promised reconstruction has not yet appeared. However, what has not ceased to appear since then are new sequels and side effects due to the Israeli forces’ use of military equipment in residential areas and against the civilian population of Gaza. 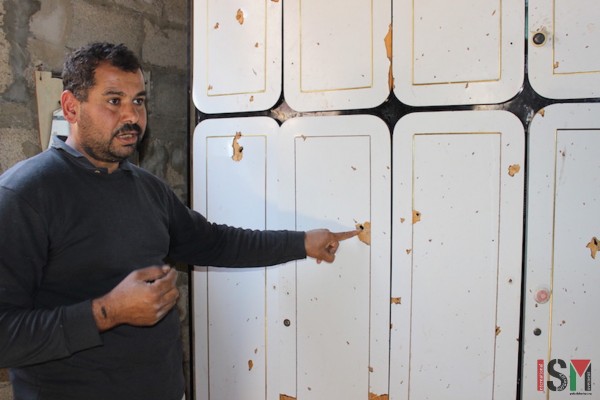 Amar points out effects of shrapnel on his cupboard

In Beit Hanoun, a town north of the Gaza Strip located on the border with the Palestinian territories occupied in 1948, ISM visited Amar Abu Janad and his family. 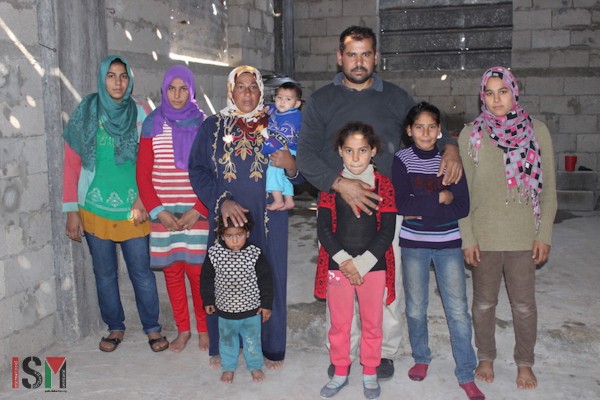 Amar with his family

Amar is 42 years and has 9 children. His house was bombed during the last slaughter while the family took refuge in a UN school. “At the school we slept on the stairs and we bathed in the toilets, where there was no running water. Besides, the whole school was very dirty and many days the food they gave us was in bad shape.”

In addition, he explains, the school where they took refuge was one of the many schools of UN attacked by the Israeli military during those 51 days of bombing. In one such attack against the school Amar’s uncle died.

During a ceasefire the family decided to go home to get some clothes, and “everything smelled like death… the street, the houses …” they said.

Besides the home Amar lost his car, with which he earned his living as a taxi driver. 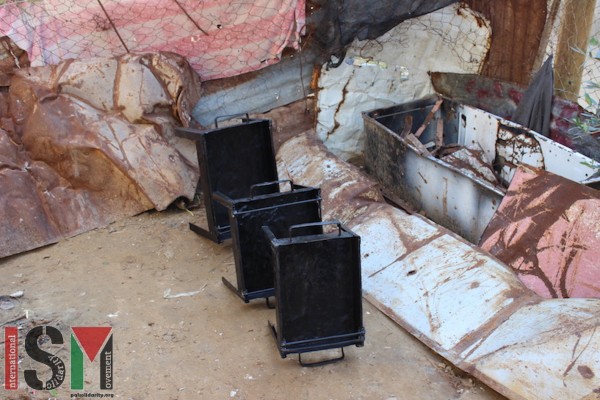 The family tells us how two weeks into the slaughter the Zionist army entered Beit Hanoun by land, shooting, in addition to live fire, smoke bombs and tear gas into all the homes, forcing the families to flee as they “could see the tanks entering our street . . . “ 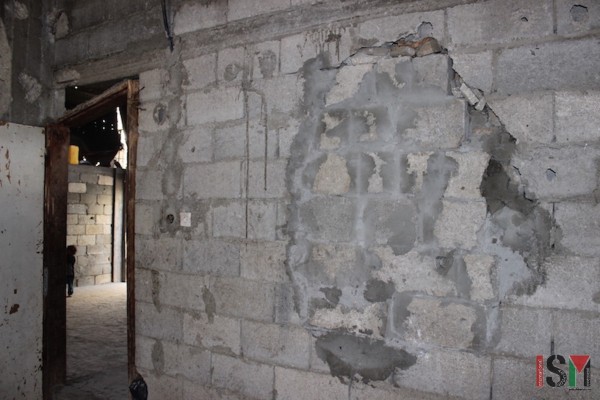 A wall of the family’s home, repaired after the Israeli attack 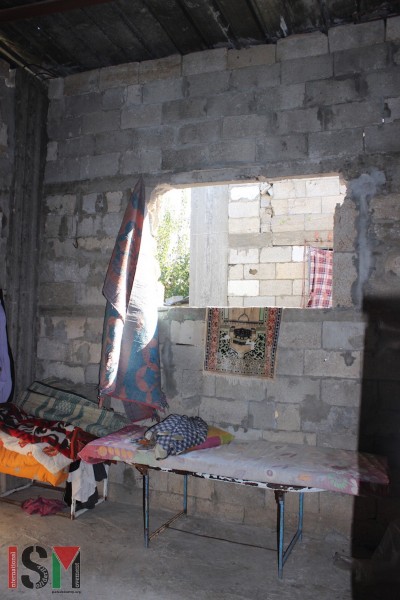 One of the family’s rooms, partially renovated

Amar’s wife explained that “after the war many people began to suffer from rare diseases. When we returned to live in what was left of our home we all started to suffer from skin problems and our oldest daughter’s eyes started to hurt and got very red. We took her to the doctor and he told us that she had a chronic problem. Periodically she suffers attacks during which we have to put some drops in her eyes 18 times a day. These droplets are so expensive and scarce that the doctor didn’t sell them to us or let us take them home, so during the crises we have to visit the doctor 18 times a day.” She also spoke of another child: “our 6 year old son started seeing double. At first we thought he was joking. . . . Recently he has begun to wear glasses, but still doesn’t see well. The doctor told us that after the war many children have begun to suffer such problems.”

Due to the stress and tension experienced during the bombings, Amar suffers from strong muscular and back pains and his 15 years old daughter developed an eczema in her hair that still present today.

As he showed they ISM team the conditions under which they currently live, Amar exclaimed: “Israel and the foreign media said that the war was against Hamas … but then bombed our homes, our cars, our animals, schools, hospitals … I am not Hamas! Was my car a terrorist too? Were my animals terrorists?

“They test their new weapons against us, using forbidden weapons against civilian population . . . They kill women, children and animals… are they also from Hamas? They know we can’t escape, all our borders are closed… How can something like this happen on the shore of the Mediterranean Sea?”

At that point they were interrupted by a man in his 30s accompanied by his blind father. The wife of Amar explains that this “is our neighbour, weeks after the end of the war he woke up one day and he was blind, no one knows how it happened.”

When we were leaving Amar’s teenage son asked us, outraged, that we convey this message to the people in our countries: “We do not need charity or food parcels, we need freedom. We are not terrorists or criminals, we are normal people trying to live in peace.”