New
Home / Features / Nisreen Azzeh continues to struggle after the death of her husband, Hashem Azzeh

Nisreen Azzeh continues to struggle after the death of her husband, Hashem Azzeh

The 22nd of November, one month after the passing away of Palestinian activist and dear friend of the ISM, Hashem Azzeh, the team of al-Khalil (Hebron) visited his widow, Nisreen. 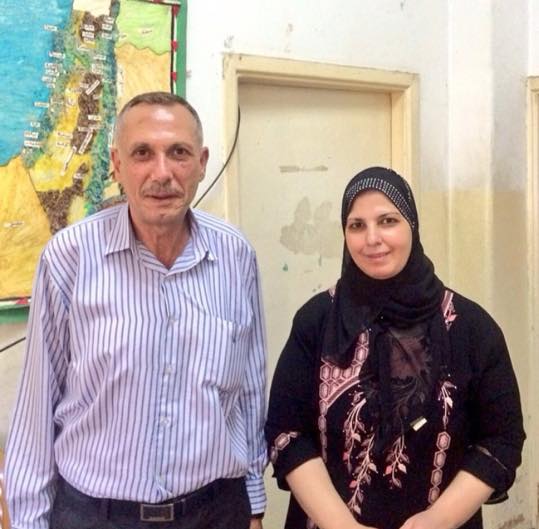 While sitting in her living room, Nisreen explained how, after her husband’s death, everyday life for her and her family has only gotten worse.

The Israeli army does not allow any visitors into the house. She also says that the army refers to them not by their actual names, but with numbers.

4 days before this conversation took place, Nisreen was coming back home to find the main access to the house closed. The Israeli soldiers had declared it a military closed zone. They asked her, “Why are you so nervous?” To which she replied, “Because the way is closed.”

The soldiers mockingly answered, “Call Mahmoud Abbas and tell him to stop the Intifada.” But Nisreen answered back to this cruel sarcasm, saying that this is H2 area, “which is ruled by Netanyahu.”

Since the main access to her home is now blocked, she is forced to use an alternative entrance where she must climb some very difficult rocks. Nisreen suffers from knee problems, and she can foresee that when the winter and the snow comes, this passageway will be very slippery, putting her in danger of falling.

Both Nisreen and her brother in law are afraid of their children going out alone on the street. They are especially afraid for Raghad, Nisreen’s oldest daughter who is 17, and her cousin, who is 19 years old. Because of their age, both of their parents are scared that the illegal Israeli settlers and Israeli army will shoot and kill them and place a knife next to their bodies, since this is what they have been doing, targeting youth of similar age, almost on a daily basis from the beginning of October. Read more about this here and here.

Therefore, Raghad is not going out of the house alone, and she had to stop walking her youngest sister to school. Now her mother has taken on that task.

Fear of settler violence is part of every day life for the inhabitants of Al-Khalil (Hebron). Nisreen will never forget how she suffered two miscarriages due to settlers’ attacks. During the first miscarriage, she was three months pregnant; the second time, she was four months pregnant.

After one of these miscarriages, which happened in 2003, she had decided to file a complaint to the Israeli Police. After waiting for 8 years, the case was finally brought to court in 2011. The settlers counted with three lawyers, whereas for her it was very hard to pay for all the necessary expenses.

She recalls how, during the first court hearing, the settlers did not show up saying they were sick. During the second court hearing, when the settlers came with three layers, she had presented a video showing how they had attacked her together with her son Younes, who was three years old at the time. The court even requested her to draw a map of the location where this took place. She did so, but the final decision of the court was that she was lying and she lost the case.

In the meantime, Nisreen continues her struggle to provide a life as normal as possible for her children.

For a deeper understanding of Al-Khalil’s daily life struggle, read an interview ISM made to late Hashem Azzeh in 2013 here.