New
Home / Features / Near Salfit, Palestinians try to save the last hill that is not yet occupied with a settlement

Near Salfit, Palestinians try to save the last hill that is not yet occupied with a settlement

On friday 4th of december, around 50 locals from the villages of Kafr Addik, Bruqin, Sarta and Biddya, in the Salfit governorate, gathered on a hill called Daher Sabbah, located between the four villages, in order to protest the occupation of their land by Israeli forces and settlers. The group had barely arrived, when the Israeli soldiers and border police came towards them and aggressively ordered them to go back where they came from. 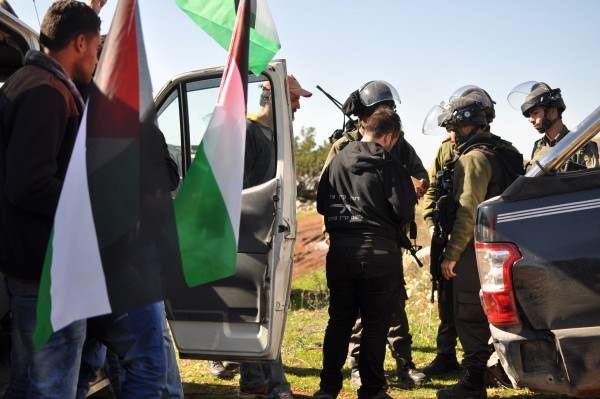 Soldiers took the keys to all cars when people arrived

A first group of people had arrived earlier and managed to reach the top of the hill, but the second group wasn’t let through by the Israeli soldiers. After taking the keys to everyone’s cars, they eventually let the group be united on top of the hill. Locals sat peacefully on the hill and celebrated the morning prayer, guided by sheikh Youssef Qa’oud, who also happened to own this land in earlier times. After the prayer, the group was urged to leave right away.

“I am afraid of young people”, explained the mayor, Jamal Ad’dik, a while later. Because this hill is far from villages and roads, it is hard to access if anyone is injured. “The soldiers who were here today, they wanted to make a problem. One mistake, they shoot. They were here to kill”, he added. 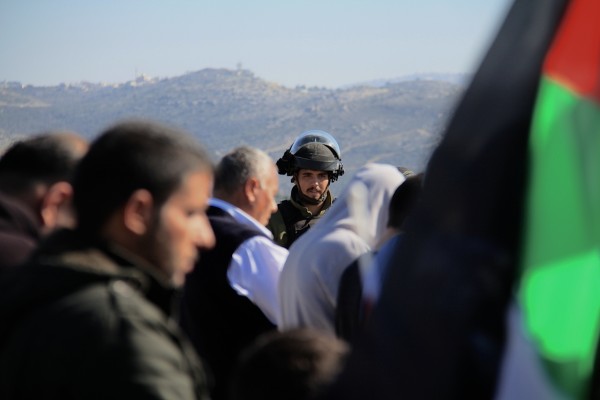 Soldiers watch Palestinians while they pray on top of the hill. 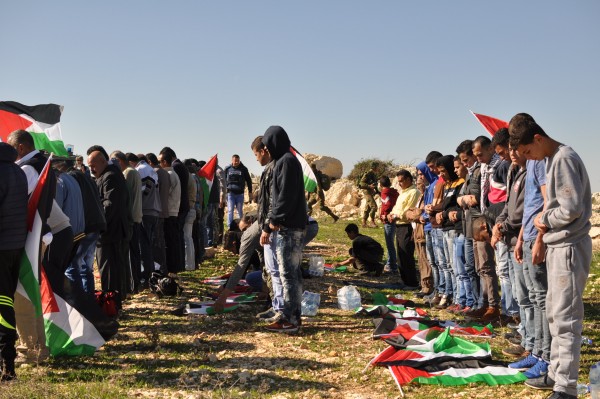 If people have decided to go to this particular hill for their weekly prayer, it’s because Daher Sabbah is the last one that is not being occupied by a settlement or an outpost, but locals fear this may soon change. Two years ago, the Israeli forces came with bulldozers and started to work to flatten the land during a few months, then stopped. A few months ago, they came back and planted grape trees. According to the mayor, the goal would not be necessarily to build a settlement, but most likely to use this place for agricultural purposes. The villagers want to show, by their presence on Daher Sabbah this past Friday and by making this a weekly meeting, that they refuse to give up this land. “This is our land, we refuse them”, explains Jamal. Two years ago this land was declared state land by the state of Israel, which makes it very difficult for Palestinians to fight for it. The owner of the land, Youssef Qa’oud, took the decision to the military court, to claim that this land was his, as it had been registered, but he lost the case.

Make facts on the ground

This area is a very strategic place for the Israeli forces. 80 % of the village of Kafr Ad’dik, for example, is in area C. Which means that people are allowed to build on 1200 dunums (area B) from the 17 000 dunums that is their village. It is easy, with these settings, to completely block the expansion of Palestinian villages and to have the space and time to expand illegal Israeli settlements intensely. The goal is, as always, to make facts on the ground. “If you go up to Daher Sabbah, every hill is a settlement. You look around and you think ‘where is Palestine, there is no Palestine !’ They want to create history”, says Fares.

In the Salfit area, the four Palestinian villages of Biddya, Sarta, Bruqin and Kafr Ad’dik are separated by an Israeli road, a few settlements and industrial areas. In the east is the illegal settlement of Ariel, fourth largest settlement in the West Bank with a population of over 18 000 people. “They want to deepen Israel in this area. Here it is only 19 kilometres wide”, affirms Fares. But if they can take this hill, then they will be able to open a large cut, a “finger”, as they call it, deep inside the West Bank, all the way to the Za’atara checkpoint, which could, in the end, completely isolate the north from the south of the West Bank. 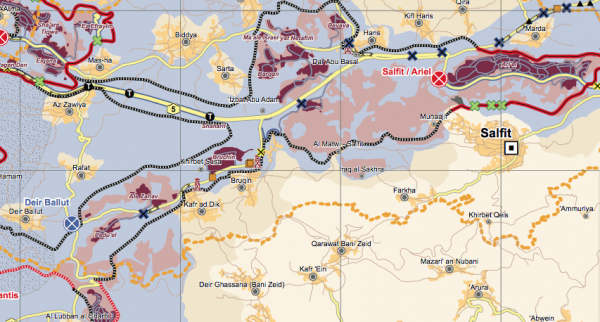 About 66 litres of water per person and per day

One of the factors that explains Israel’s effort to take over land in the Salfit Governorate is that Kafr Ad’dik, Bruqin, Sarta and Biddyia are standing on the second largest aquifer in historical Palestine. The water is exploited by Israeli water company Makarot, which means that Palestinians have to buy limited resources of water to Israel for an excessive price while the surrounding settlements have access to an unlimited amount for a fair price. For both the villages of Kafr Ad’dik and Bruqin, around 10 500 inhabitants in total, only 700 m3 of water is granted per day, around 66 liters per person and per day. As a comparison in France, the average water consumed per day per person is over 150 litres per day. One of the other problems brought by the presence and expansion of settlements in the area is the water pollution, which would, according to the mayor of the village, be coming from the illegal industrial area of Ale Zahav.

In the last five years, settlements have aggressively expanded in the Salfit area. According to Fares Dik, member of the Kafr Ad’dik municipality, “settlements are 300 % bigger today than in 2010”. Palestinian villages, on the other hand, haven’t been able to grow. In this region the Palestinian population is of around 60 000 divided into 19 villages, but they are now outnumbered by settlers from the 24 illegal Israeli settlements.