Israeli soldiers occupy Palestinian house to set up military base

For the last 15 days the family of Abu Shykri Al-Atrarshi have had no access to the top two floors of their house, which was illegally taken over by the Israeli occupation forces and where they set up a military base. 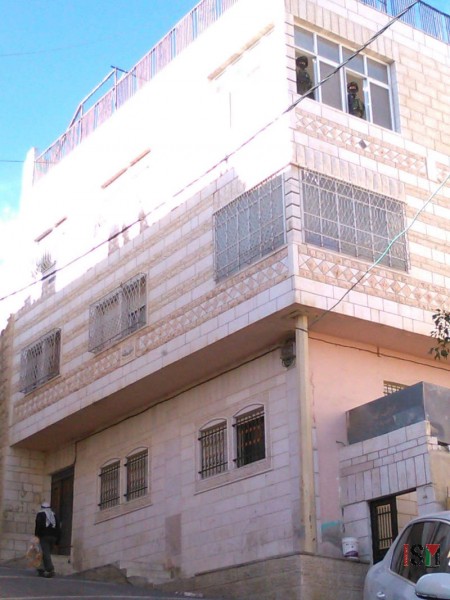 Ten Israeli soldiers suddenly showed up at the house in the neighbourhood of Abu Sheineh, Al Khalil; they broke in by smashing a window in the door, took the key and demanded that the family vacate the third floor. The soldiers did not have any documentation to explain or justify the incursion nor did they give an explanation to the family why their house was being taken over. Any questions are ignored and the third floor as well as the roof top are now off limits.

Since the soldiers arrived they have broken the windows, and shot holes in the water tank which supplies clean water to the household. They then took all the blankets on the premises and used them to dry the water leaking from the tanks. The family also reported that once the water supply was fixed the soldiers contaminated the water and used the apartment and roof as a toilet.

The soldiers never leave the apartment empty, but a few times per day there is a shift change. This happens at different times every day so there is no knowing when, and the soldiers move in and out as they please anyway. This means there can be soldiers moving throughout the building at any time, terrifying the family- especially the young children who no longer dare to leave the house on their own. The soldiers use the roof as a lookout and also frequently fire weapons such as teargas, from there into the surrounding neighbourhood.

The three story house is home to 13 people, now crowded into two small floors- including a young disabled child. They have no idea how long the soldiers will stay, or if the family will get their house back at all. They contacted the local DCO (District coordination office) who advised them to get a lawyer, which they did. The lawyer has now started the process to take the case to an Israeli court in Haifa, Israel. However Abu Shykri Al-Atrarsh has had no information on when the case will be heard or when a judgement can be expected. This, as in many cases, can take months if not years and in the meanwhile the family is trapped. Abu Shakri believes the army is trying to make the family leave the building altogether, but they are resolutely staying put.

This family now has to try to live their life underneath the very people who have broken into, stolen and disrespected their home. The daily struggle of living under the occupation is hardship enough but having your own home taken from under your eyes, and not being able to do anything about it is absolutely heartbreaking.

ISM today took pictures of the soldiers in the building to help the family evidence their presence there, which is needed for the court case. Every time the family has tried to take pictures themselves the soldiers have taken their phones and deleted the pictures.