Illegal Israeli settlers threaten to burn a family of 11

Earlier today, November 28th,  a group of Israeli illegal settlers, in the presence of three Israeli soldiers, threatened to burn down a family in the village of Madama, occupied West Bank.

At noon, 25 settlers from the nearby settlement of Yitzhar trespassed the land of the Palestinian village Madama. Once they had reached the outskirts of the village they started yelling and threatening a family. The family, who previously had problems with the settlers from Yitzhar, includes 9 children and an additional one is expected within two months. 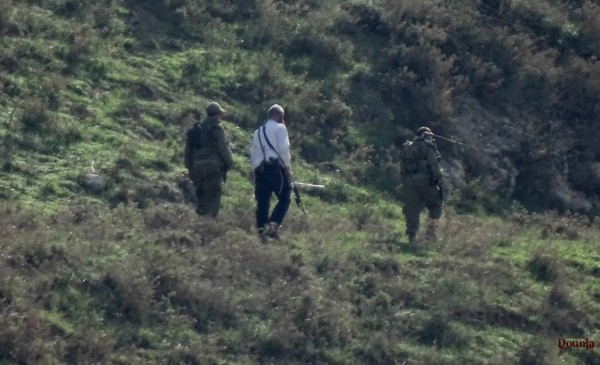 1 illegal settler walking on the hills around Madama, accompanied by 2 Israeli soldiers.

The settlers, some of whom were armed with rifles, were standing within 100-150 metres from the family’s house when they were yelling at the family. The illegal settlers were threatening the family with facing the same end as the Dawasheh family, referring to a previous attack this year where a settler firebombed a Palestinian family. 18 month old Ali Dawasheh was burned alive and both his parents later succumbed from the arson attack, leaving 4 year old Ahmed as the only surviving member of the family.

The settlers today also yelled at the family that they would be the next Mohammed Abu Khdeir. Mohammed was only 16 years old when he was kidnapped outside his house in the neighborhood of Shuafat, East Jerusalem. The kidnappers, later found out to be Jewish Israeli nationalists, beat him up and forced him to drink gasoline before finally burning him alive, from the inside out.

After today’s attack, the family in Madama is feeling even more insecure. Due to repeated attacks by the settlers the family recently got founding by the authorities to put up a barb wire fence, surrounding the house. And the father of the family has put a cover on the windows to protect his family from potential rocks thrown by the settlers.