On Thursday 26th November, at around 8 am, Israeli forces detained two young Palestinians boys at Quitoun checkpoint in occupied Hebron (Al-Khalil), allegedly throwing stones at the soldiers. On the way towards the police station where the Palestinian boys were taken by the Israeli forces – near the Ibrahimi mosque—two international human rights activists were documenting the events at the scene.

Embarrassed by the questions of the international human rights activists, but most of all by them witnessing this illegal detention, Israeli forces decided to arbitrarily arrest one of the human right activist, claiming that she was disturbing Israeli forces in doing their job. 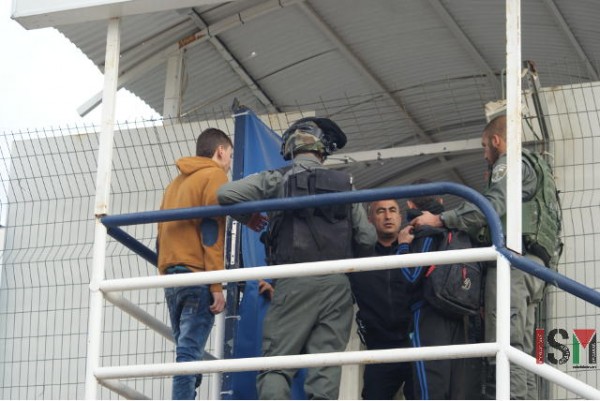 The child was released after around an hour in detention, in tears and shock.

Inside the police station, the French human rights activist and the Palestinian boy were waiting for  investigation, without being allowed to use their phone to inform their families and lawyers

Inside the police station, the French human rights activist and the Palestinian boy were waiting for the investigation, without being allowed to use their phone to inform their families and lawyers.

After one hour, they were taken to the police station of the illegal settlement Kiryat Arba for the investigation. The international human right activist was accused of preventing the Israeli forces to do their job and blocking their way, although she merely asked for the age of the boy, as clearly visible in the video

In the official document by the Israeli police, the human rights activist is accused of being a danger to the public safety the Israeli state and was therefore banned from the entire West Bank for two weeks
Until now, it remains unknown what will happen to the eighteen years old boy who had been arrested