The broken wheel of Israeli ‘justice.’ The case of Mahmoud Abujoad Frarjah

Sireen Frarjarh and her husband Mahmoud Abujoad Frarjah met eyes numerous times during this past Tuesday’s trial in an Ofer military court hearing.  The trial was to determine if the young, newly married Palestinian man from the Deishah refugee camp in Bethlehem, would be held in detention until the conclusion of his court proceedings.  The judgement, to continue Mahmoud’s detention was passed down by the blind eyes of the Israeli ‘justice’ system for an alleged crime over a year old. 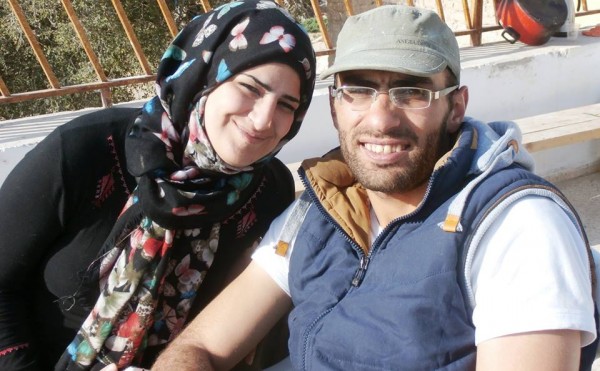 Mahmoud and his wife Sireen, married just three months at the time of Mahmoud’s arrest in Jordan by Israeli authorities.

On September 9th, Mahmoud was arrested whilst traveling to Jordan on a family holiday. He was blindfolded and detained for 8 hours, during which he was denied water, food and toilet facilities. He was charged with throwing stones at a demonstration a year ago near Rachel’s tomb in Bethlehem.  Mahmoud had his initial hearing on Wednesday 16th September, which was then postponed until Sunday, September 20th. And although the judge ruled that Mahmoud should be released on September 29th, he subsequently refused his release.

The backdrop of this case is key. Minimization: Israel committed a human rights atrocity, an international law destroying massacre which claimed the lives of nearly 2,200 Palestinians, nearly a quarter of them innocent children during a military operation handily termed Protective Edge.  (To date, no Israeli military or governmental personnel have sat in a courtroom, legs in chains, as were Mahmoud’s, and faced a judge for these heinous, reprehensible acts.)  Maximization: Thanks to new legislation which perpetuates the critically and intentionally lopsided imbalance in Israeli courts for those on the wrong end of the class divide, Palestinian (alleged) stone throwers are more likely to face detention without bail until the end of their court proceedings.  These regulations are applicable to Palestinian children as young as 12 years old.

Collective punishment was the overall tone of Military Judge Lt. Colonol Shmuel Keidar in his decision in this past Tuesday’s trial to accept the appeal of the military prosecution against the decision to release Mahmoud on bail, “With the security reality that to my sorrow exists in the area, I believe that the court can deviate from the micro-considerations regarding the defendant himself and yes to considerations of general deterrent, the touch considering the wide population in the area.  Because of these things I believe it is not wrong to use the the reason of general deterrent straightaway or for detention and should express it as much as the situation needs. For all of these reasons I accept to keep him until the end of proceedings.”

The micro-considerations Keider is so cavalierly referring to here is that the alleged witness to the stone throwing was one man who  was arrested and during interrogation gave twenty Palestinian’s names to investigators, Mahmoud’s being one of them.  With such baseless evidence, the Keider is willing to continue Mahmoud’s imprisonment until the trial’s conclusion; likely a considerable amount of time.

The micro-considerations being that Mahmoud is of no security risk and is being held and tried on a basis so flimsy it wouldn’t get so much as a peek inside a courtroom in most places the globe over.  In the end, Mahmoud is yet another young Palestinian who will fall under the weight of the broken wheel of the Israeli ‘justice’ system.

The fact alone that Israeli lawmakers can seriously argue for harsh sentence structures for Palestinian stone throwers, this is an act of resistance to an internationally noted criminal six decade military occupation, whilst silently they make space between each passing day and the dark hallway of massacre and subjugation left in their wake, is an utter absurdity.

In the end Mahmoud will possibly face the same road most Palestinians in Israeli courts face.  In order to avoid languishing in Israeli prison for up to two years while court proceedings drag on to the punchline crescendo of a trial which ends, almost across the board, badly for every Palestinian enduring it- Mahmoud can plead guilty and take a deal giving him several months imprisonment.  And it makes it that much easier the next time Mahmoud, or any Palestinian for that matter, is arrested to show a history of supposed criminal behavior with previous guilty pleas and sentences served.

The case of Mahmoud Abujoad Frarjah is another sounding of the death knell for any kind of justice being seen for the Palestinian people.