Twenty minutes past two o’clock, a group of 14 soldiers entered the Palestinian market, bustling with school-children on their way home from school and adults doing shopping. The Palestinian souq is located right next to illegal Israeli settlements. The soldiers entered the souq from the direction of the settlements, took over the main junction at Bab al-Baladiyya and immediately stopped all civilians from passing by in any direction. 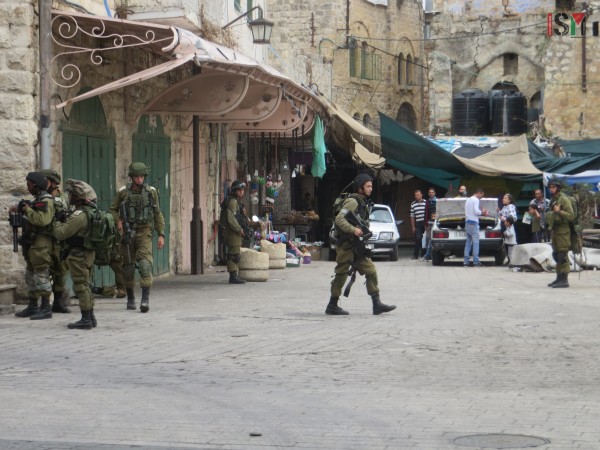 Just a few minutes after Israeli forces aggressively took over the main intersection, they started firing tear gas towards a group of children. In total, one stun grenade and 14 tear gas canisters were fired into the busy market by Israeli forces. All the time, settlers on top of the nearby Beit Romano settlement were watching and cheering on, as Israeli forces showered tear gas on civilians in the Palestinian market. 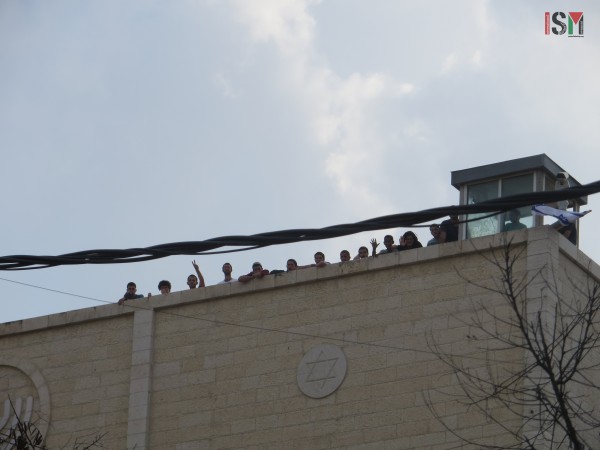 While the soldiers were shooting tear gas and a part of the soldiers was going closer into a Palestinian neigbourhood to shoot tear gas, Palestinian freedom of movement was entirely stopped in the market for more than half an hour. A group of at least 20 school-girls was stopped on their way home from school by the soldiers yelling at them and raising their guns at them, ordering them to move back immediately. When the school-children were asking to be allowed to ‘just go home’, Israeli forces refused to allow them passage and continued yelling at them.

A Palestinian man that drove up in his car was also denied passage. He got out of his car and requested soldiers to check his ID and pleaded to be allowed to go through, as it was an emergency and he had to go to the hospital. Even though soldiers in the beginning refused to let him pass dismissing his urgent request, they did finally allow him to go after about 2 minutes.

While soldiers were blocking the market, about 50-80 Palestinian civilians were stopped and not able to move in any direction, forced to wait for the soldiers to finish their violent attack on every-day life in occupied al-Khalil. Once the soldiers went back through Bab il-Baladiyya towards segregated Shuhada Street, people were finally able to continue their everyday life.
Hebron International law Israeli Army Tear-Gas Canister 2015-10-26
ISM Media