On October 4, at 4:00 in the morning, 8 Palestinian men were arrested under extremely violent conditions by Israeli forces in the city of Nablus, North West Bank. The men have been accused of participating in the killing of two illegal Israeli settlers driving a car on the Beit Furik road on October 1st.  According to a spokesperson for the families of the accused men, no evidence has been presented to uphold the accusations.

Arrest Operations
Karam Al Masri, 23 years old, was violently arrested in the Nablus hospital. According to the spokesperson, Al Masri was lying in recovery from an operation on his left shoulder, which had been injured in a work accident in a Nablus iron factory.

Approximately 20 men from the Israeli security forces stormed at 4:00 in the morning with guns into the hospital to kidnap the patient who was sleeping in room 302. When leaving the hospital, they broke the cameras in order not to leave evidence, but you can watch the video when they entered searching for Karam al Masri here.

At the same time, the three cousins, Samir al Kusa, 23 years old, Zahi al Kusa, 32 years old, and Abdullah al Kusa,19 years old, were arrested while sleeping in their homes in Nablus and Askar refugee camp, were Samir was visiting his parents in law.

Samir’s 25 year old wife and 50 year old mother were both beaten up by the Israeli forces. Samir was first beaten brutally, then forced to walk down the hill while bleeding heavily, then put to the ground where soldiers began beating him again, kicking him with guns, to the point that even one soldier urinated on him. Nearly 300 soldiers participated in this operation.

In the case of Zahi and Abdullah al Kusa, who were staying in the same home, they had their house raided, furniture destroyed, and their families terrified with gun shots. Both were forced to step out the house, strip off their clothes, beaten up, forced to walk naked in the street, sworn and cursed at and humiliated. When another cousin of the men tried to take a picture, a soldier shot into his leg at such close range that the bullet entered the leg and came out, and managed to enter and come out the second leg, too. This man spent 4 days in the hospital. He is 21 years old.

Meanwhile, Rasem Khatab, a 37 year old nurse, was working in a night shift in the hospital at the time he was arrested. Israeli forces took him to his home, raided the house, broke the furniture, beat him in front of his wife, 2 daughters and parents. This operation included approximately 40 soldiers.

Even more shockingly, Ragheb Elawi, a 35 year old man who had recently undergone 2 heart surgeries and remained in his house in state of recovery was also violently arrested. Israeli soldiers stormed his home at 4:00 am terrifying, once again, his whole family, to arrest him. Despite the fact that this man is evidently in a delicate state of health, he was also beaten in front of his family.

In addition, Zeid Ziad Amer, 23 years old, and Yahya Hajj-Hamad, 24 years old, were also arrested at the same early hours in the morning in similar conditions of violence, raiding their homes, waking up their families and beating them up.

In all these cases, the soldiers blocked the neighborhoods, surrounded the houses, guarding them outside, after having closed the entrances of the city.

To this day, only Zahi al Kosa’s parents have information about their son, who will be imprisoned for two months with the highly likely possibility that the imprisonment will be extended indefinitely after the next military court hearing takes place. He is being held in the Megiddo military prison.

Samir and Abdullah are jailed in the Petah Tikva prison, without any other information available. The whereabouts of all other 5 prisoners are unknown until know. Neither their families, lawyers nor the Red Crescent have any knowledge about them.

House Demolition Orders
In the morning of Thursday 15th, 11 days after the 8 men were arrested, three of the men’s families received home demolition orders from the Israeli forces. The Al-Kusa family’s home is located at the top of the South mountain in Nablus, in the Al Dahiyya neighborhood, right below an Israeli military base. This house has already been evacuated by the family, and since it is on the first floor of a three story building, the army plans to fill it with concrete. 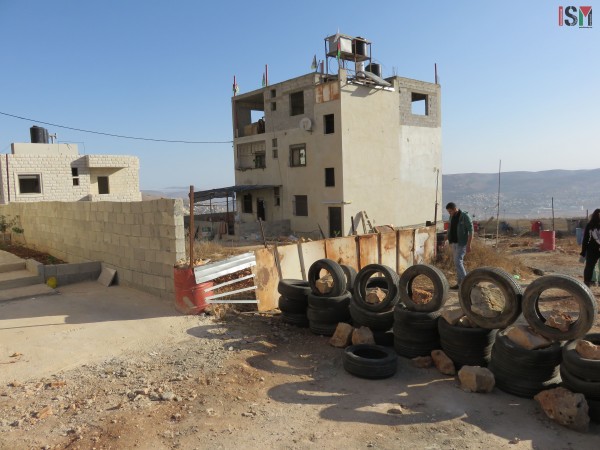 The Al-Kusa family home on the first floor of the building is now abandoned, waiting to be filled up with concrete by the Israeli army.

The homes of Karam al Masri and Yahya Hajj-Hamad have also been emptied by their families, who have moved to other family members’ homes, while they wait for their houses to be torn down.

These house demolition orders notified that they would be carried out within 48 hours, but even though the date has expired and the destruction hasn’t happened yet, it is common knowledge that the Israeli army can carry out these actions a long time after the orders have expired. In many cases, the houses can be torn down weeks, months or even years after demolition orders expire, representing a clear tactic used by Israel to create a psychological warfare and stress in the Palestinian population. Today, in the neighborhood of Al Dahiyya, all the neighbors living around these three homes are unable to sleep in the night because of fear that the army might come at any time.

What is even more concerning, is that the families of the imprisoned men are going through enormous distress from the uncertainty of their sons’, brothers’, husbands’ and fathers’ futures, in which they fear the very highly probability that their loved ones may be sentenced anything between 20 years to a lifetime in jail.

It is important to understand that these actions are part of a larger strategy that Israel conducts as a form of collective punishment and psychological torture towards Palestinians. The Israeli government has recently approved a new policy that states that, in case the government decides that a Palestinian is a ”terrorist” who wants to kill an Israeli civilian, settler, army or police, the government will take the right to kill him, not return the body to the family, later demolish the family’s home and subsequently forbid the family to build a new home in the same site of the demolished house. Given that Israel most of the time decides in an arbitrary manner and without any grounds that Palestinians are ”terrorists”, not only does it punish the people it claims to be dangerous, but also punishes their whole families, therefore proving to be extremely abusive and unjust in their law and actions. This form of collective punishment not only puts an enormous amount of psychological pressure on the Palestinians, to say the least, but also facilitates Israel’s ongoing plan of stealing their land and expanding its colonization project.