UPDATE: A court just ruled to keep Vittorio Fera in prison until an actuall decision is taken on Monday. He was violently thrown to the ground and arrested by Israeli soldiers in Nabi Saleh yesterday. He is being accused of throwing stones and attacking the soldiers at the demo – a baseless claim without any evidence. At the demonstration he was filming the vicious assault of Israeli forces on a Palestinian boy, that was attacked and choked by a soldier. Still, the Israeli court ruled to keep him in prison till Monday.
Watch a video taken of the soldiers attacking Vittorio and arresting him: https://youtu.be/KoYEMHi2xbM

On Friday the 28th of August 2015, two peaceful demonstrators were violently arrested and a child viciously attacked by Israeli soldiers in the Palestinian village Nabi Saleh in occupied Palestine. Every Friday the people of Nabi Saleh protest against the illegal settlement build on the villages’ land. 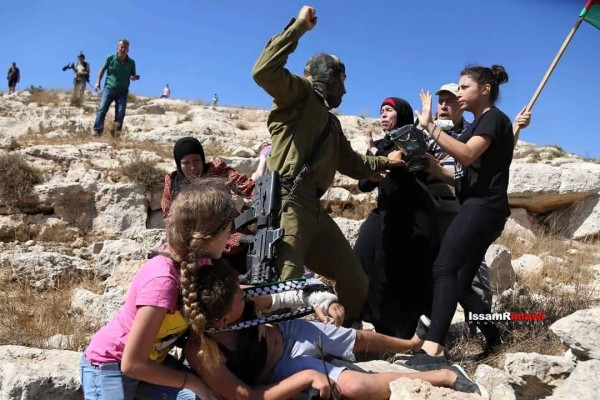 Today at around 3 pm one Palestinian male, Mahmoud Tamimi, and one international activist was arrested in the Palestinian village Nabi Saleh close to Ramallah. They were arrested during a Friday demonstration against the illegal settlements on the land belonging to the people of Nabi Saleh.

Only a few minutes after the protesters peacefully started their march towards the gate, which is regularly blocked by the military preventing any movement in- or outside of the village, the Israeli army began attacking the non-violent protesters with dozens of rounds of tear gas.

The soldiers then ambushed the demonstrators escaping the clouds of tear gas by surrounding them. They attacked and then arrested Mahmoud Tamimi, shoving him down the hill towards the illegal settlement, where he was forced to lie on the ground. 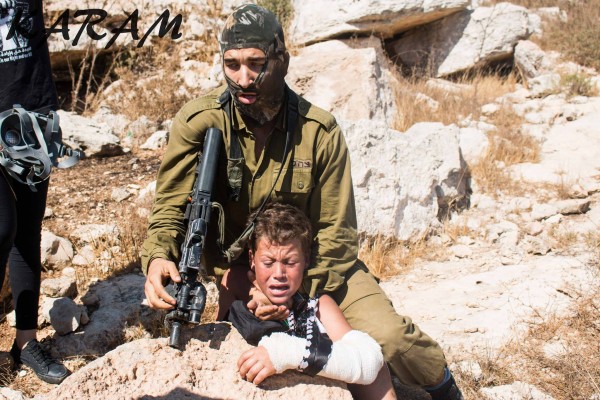 Around the same time, a Palestinian boy was violently attacked by a soldier throwing him to the ground, choking and almost suffocating him in the process. “While the boy was screaming in pain his family came to rescue him from the soldiers’ vicious assault”, Josephine, a Danish activist explains. 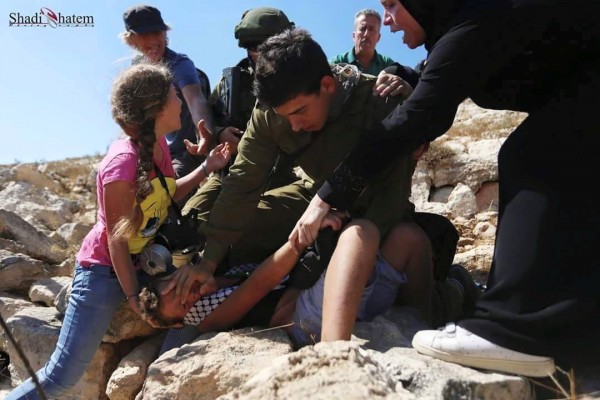 A group of peaceful international demonstrators trying to document the attack on the boy, was ambushed by another group of soldiers, who violently pushed a 31-year old Italian man to the ground and proceeded to arrested him.

Both the Palestinian and the international were being held captive in a military jeep by the Israeli army for almost nine hours, before being brought to a police station.