A group of twenty-five extreme Jewish zionists from France attacked three international activists in front of the shops near the Ibrahimi Mosque in Hebron, H2 area this afternoon. 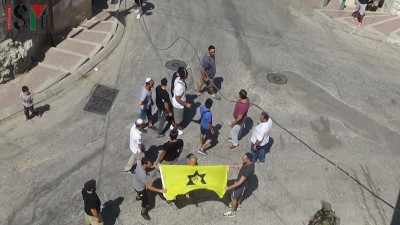 A little later the same group of extremists reached the house in which other international activists are living. They tried to climb up onto the stairs leading to the front door of the house and enter the building. They did not succeed and walked in the direction of the illegal Tel Rumeida settlement next to the house of the activists. They returned to the house after another half hour and verbally threatened the activists to come outside the house and fight with the extremists on the street. They chanted about Israel and sang songs in Hebrew.

The group of extremist zionists then left the house and returned to the area in front of the Ibrahimi Mosque. There they attacked Palestinians and vandalised one of the shops. The tables in front of the shop were smashed on the ground and ceramic products were thrown into pieces on the street. Subsequently two local Palestinians, while being beaten up by the extremists, were arrested. At least one from the extremist zionists was detained by the Israeli police.

Palestinian man was arrested after attack of the extremists 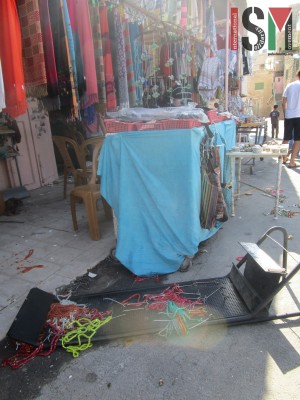 While marching around H2 area and attacking Palestinians and international activists, the extremists proudly held the infamous yellow flag with a fist from the Kahane political group together with the Israeli national flag. Kahane is a far-right political group which was barred from the Knesset in 1994. Today it is considered to be a terrorist organisation by Israel, Canada, the EU and the United States. The paramilitary wing of Kahane is the ultranationalist Jewish Defense League. In the illegal Tel Rumeida settlement next to the house of the international activists is home to a former member from Kahane and a leading figure of the Jewish Defense League, Baruch Marzel.

The Kahane group is officially considered to be a terrorist organisation under Israeli law. However, this did not prevent the soldiers to be friendly with the extremists when the group was intimidating the activists and attempted to enter the house of the activists. Instead, the extremists and soldiers patted each other warmly on the back and exchanged firm handshakes.

The attempt of the extremists to intimidate the international activists at their house was recorded. Watch the video here :