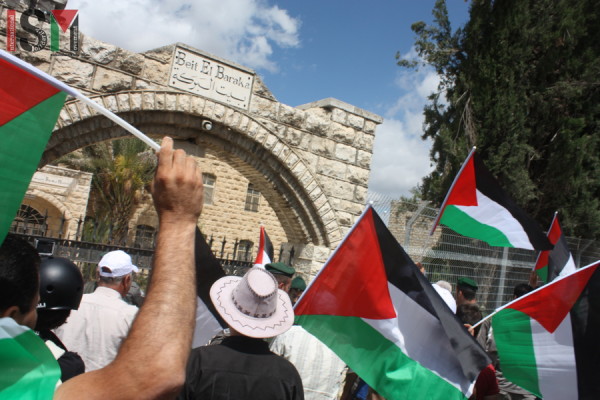 Today in Beit Ummar, just north of Al Khalil (Hebron), Israeli forces broke the arm of local activist Yousif Abu Maria, and then arrested him. Yousif was protesting with a group of around 30 local Palestinian activists outside an illegal Israeli settlement. While the police and military attempted to arrest Yousif he was subjected to excessive violence that resulted in his arm being broken. Israeli occupation forces continued to violently arrest him even though his cries of pain were obvious.

At 10.30 am the group drove to the gate of the Beit Al Baraka building. Roughly four years ago the old hospital and church complex was purchased by the right-wing Israeli Zionist group, Israeli Land Fund, under the guise of a Christian refurbishment organisation. Aryeh King, director and founder of Israeli Land Fund, had brought the property to support the illegal expansion of settlements in the occupied West Bank.

On reaching the complex the Palestinian activists marched to the front gate chanting for a free Palestine. The Palestinians were joined by many Israeli and international activists. Seconds after arriving over 20 boarder police, police and military, quickly surrounded the group. The occupation forces then began pushing people back with their rifles. Yousif was injured and thrown to the floor. An Israeli activists then attempted to pull him away from the violence, but was also assaulted and pepper sprayed in the eyes. Both Yousif and the Israeli activists were dragged away to the military jeeps parked near by, but Yousif was then arrested and the Israeli activists was released without any repercussions. 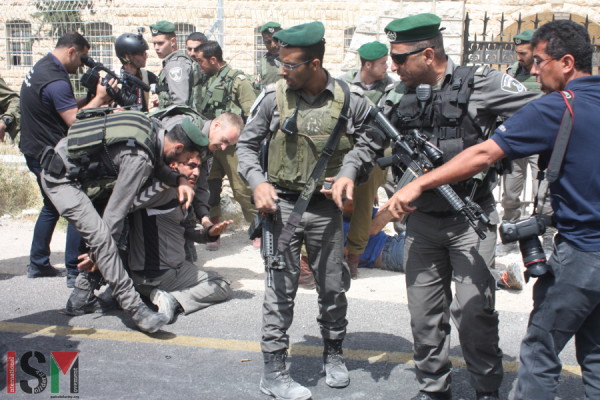 Yousef Abu Maria on his knees after occupation forces broke his arm, during the arrest

A large amount of sound grenades were also used. Around 20 of the heavy metal grenades were thrown, some directly at protesters causing superficial injuries. After forcing all protesters to move away from the fenced off complex, Israeli police then questioned and checked the ID’s of many of the activists. 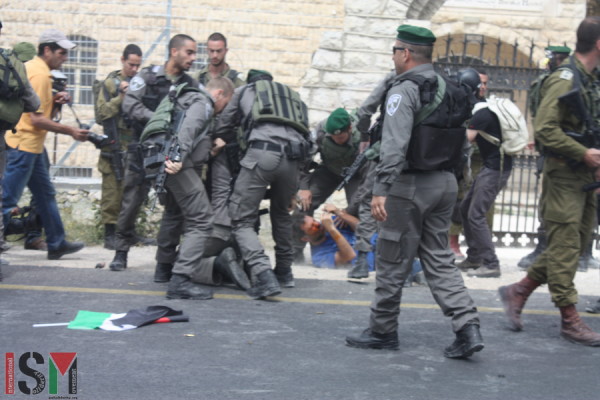 The Palestinian group finished the protest with the promise to return and continue to use non-violent action to resist the expansion of illegal settlements that both annex Palestinian land illegally and are detrimental for the economy and existence of Palestinian communities. After an increase in Israeli military and police presence over the past two months around the Al Baraka building, the residents of Beit Ummar worry that, if occupied by settlers, the complex will lead to further disruption of the entire region. 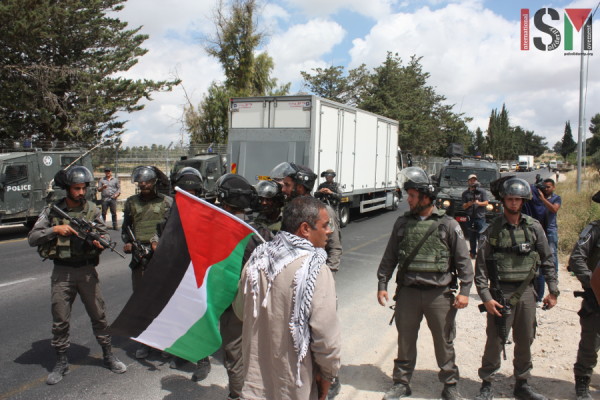