On 4th April 2015 over 25 Palestinian activists from Bruqin and the surrounding area of Salfit region of the West Bank, gathered on top of a near by hill to plant roughly 30 olive saplings. The group were joined by international activists who accompanied the locals in planting the young trees across the hill side.

Unusually, this time the protesters managed to successfully plant all trees mere meters from the settlement without facing harassment or violence from settlers or military. Locals are planning further actions to continue their grass-roots non-violent struggle. 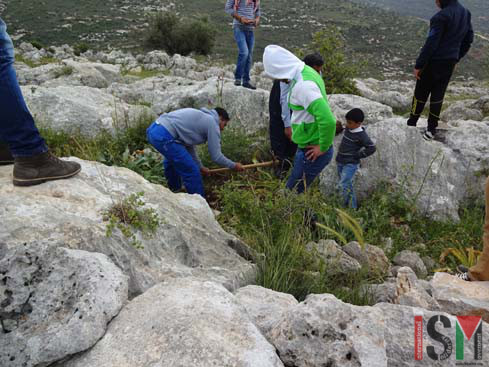 Today’s tree planting was an act of resistance against the expansion of Ariel West Industrial Park, an illegal Israeli settlement originally colonized by Israel in 1999. As in the rest of the West Bank, this settlement growth is causing daily life of Palestinians in the villages of Bruqin and Kufr al-Dik to steadily deteriorate. Land is progressively being confiscated for settlement growth, sewage from settlements flows freely onto Palestinian owned land, including between the village houses. Despite plentiful water resources, water for the Palestinians is highly restricted. There is not nearly enough land to support Palestinian population growth.

To the north of the villages is the settlement of Bruchin, to the north west are Alei Zahav and Lesham, to the north east is Ariel, to the west is the Industrial Zone, and to the South-West Peduel settlement. This illegal expansion is referred to by some as the ‘long finger of the occupation’; it’s aim is to divide the occupied West Bank in two halves, separating Nablus from Ramallah. Ariel West forms part of the “Ariel Finger”- a zone of settlements stretching from the 1948 Green Line towards the Jordan Valley. If completed, this settlement area would cut the West Bank in half. Salfit, Nablus and Jenin would be separated from the southern West Bank.

Areas in and around illegal Israeli settlements are classified as “Area C” under the Oslo Agreement. Palestinians who own land in area C are banned from doing almost any work or making any changes on their land. They can neither plant a tree, nor move a stone; if they do, the Israeli military will come and order them to return the land back to its original state or face demolition. At the same time if the land is not worked on for three years Israel will confiscate it using an old Ottoman law. In almost all such cases, the land confiscated from Palestinians would be handed over to illegal settlements.

By planting trees in the shadow of Ariel West settlement, Palestinians are reaffirming their ownership of the land in the face of the Occupation.