On the morning of February 20, Palestinians in the South Hebron Hills awoke to find that 36 olive trees had been cut or seriously damaged during the night, probably by Israeli settlers. The 25 year-old trees, owned by the Hushiy family from Yatta, were located near the village of Qawawis in the South Hebron Hills, between the Israeli illegal outpost of Mitzpe Yair and the Israeli settlement of Suseya, beside Bypass road 317. 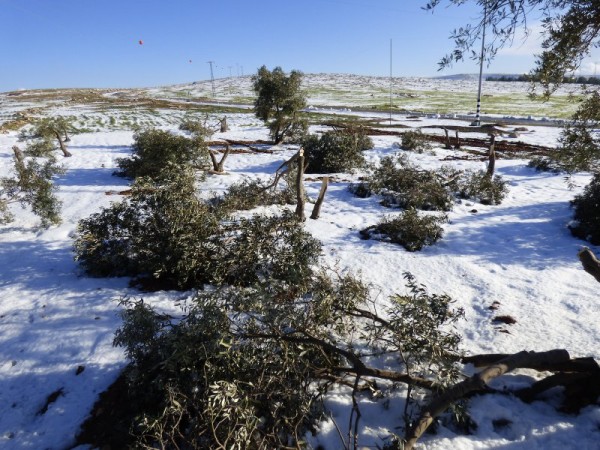 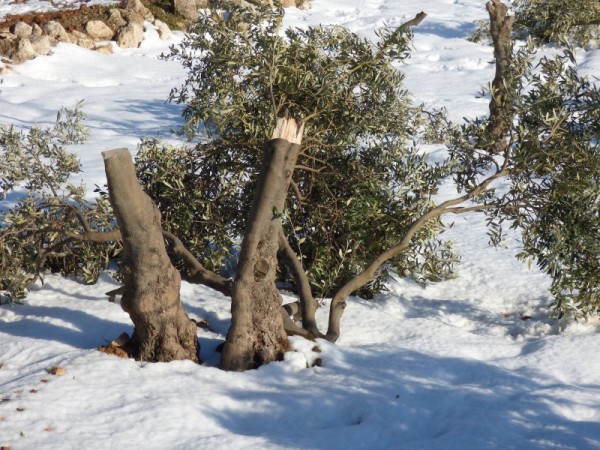 This is the third incident of Israeli settler ‘price tag’ vandalism against the Palestinian inhabitants of the South Hebron Hills in the last two months. On January 9, in the same area between the Bypass road 317 and Suseya settlement, Palestinians discovered nearly 200 olive trees cut on their property. On December 31, two settlers threw a molotov cocktail into a Palestinian house in Ad Deirat village.

Palestinian residents of the South Hebron hills have suffered from the presence of Israeli settlers since the 70s. By occupying Palestinian agricultural lands and destroying Palestinian olive trees, crops and property the settlers seek to deprive the Palestinians of their main livelihood. Ongoing settler violence deprives Palestinian families of security in daily life, and restricts their freedom of movement.

According to the Fourth Geneva Convention, the Hague Regulations, the International Court of Justice, and several United Nations resolutions, all Israeli settlements and outposts in the Occupied Palestinian Territories are illegal. Most settlement outposts, including Havat Ma’on (Hill 833), are also considered illegal also under Israeli law.

Despite attempts by settlers to force them from the area through violence and intimidation, the Palestinian communities of the South Hebron Hills remain strong in their commitment to nonviolent popular resistance against the Israeli occupation.