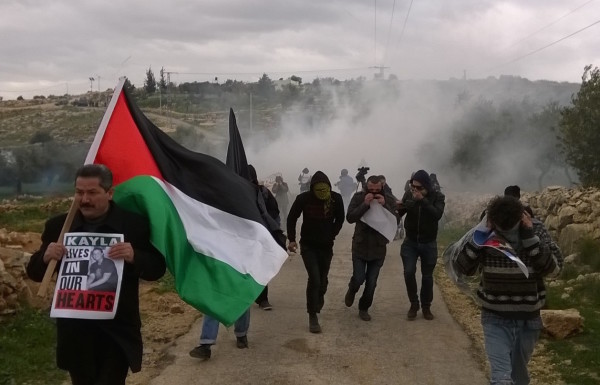 “As people were protesting a soldier suddenly came running, wielding pepper spray, spraying it at journalists and activists indiscriminately,” reported Karam Saleem, a Palestinian activist present documenting the demonstration. Those who had been pepper sprayed, including Mohammed Khatib, were taken down to an ambulance to treat their burns. Saleem continued, “Mohammed was about twenty meters away from the main part of the protest, still suffering from pepper spray, when suddenly a soldier ran after him and grabbed him. Another five soldiers quickly surrounded him and shoved him violently to the ground.” 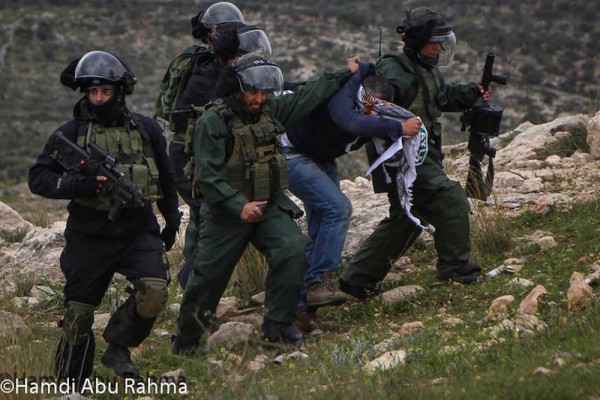 He was handcuffed and blindfolded before being loaded into a military jeep. 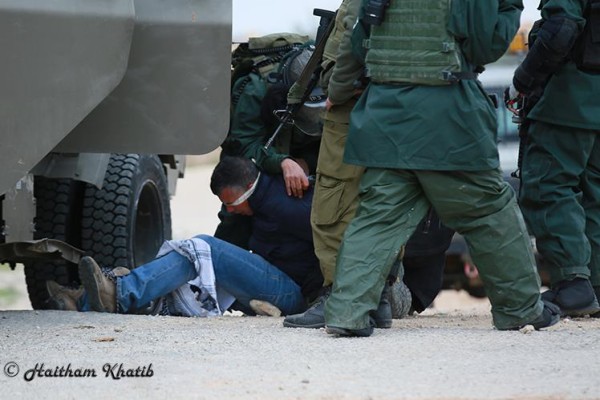 Israeli forces targeted journalists and those attempting to document the protest; many were shoved and threatened while attempting to photograph or film. Those present reported that the Israeli military also fired tear gas directly at people holding cameras. 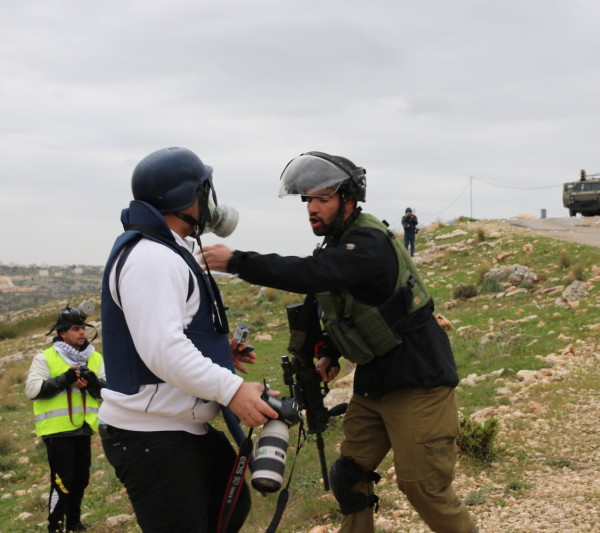 “The army was extremely brutal yesterday in their use of tear gas, beatings, and pepper spray,” recalled Tali Shapiro, an Israeli activist who was severely pepper sprayed in Friday’s demonstration, suffering from first degree burns on her hands, ears, and most of her throat and neck. “We saw they were beating and arresting someone (Mohammed Khatib), so I ran towards them. By the time I got up the hill Mohammed had been taken away and another man [Mick] was on the ground with many soldiers on top of him, twisting his limbs and head. I immediately took out my phone to take pictures. The soldiers started pushing away journalists. They formed a line in front of several of us, and before I could assess the situation another soldier sprayed my face with pepper spray.” 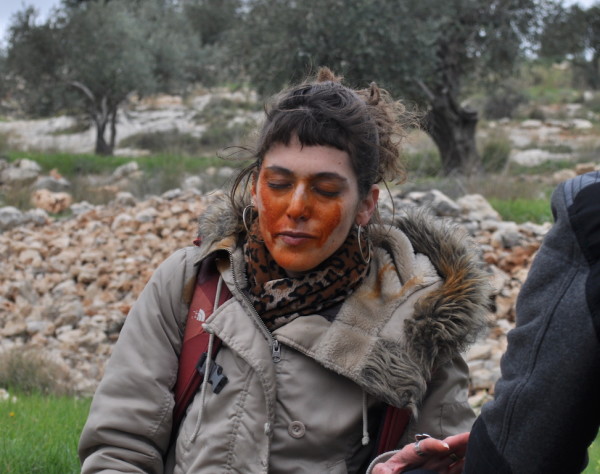 Fifty-six-year-old Mick Bowman, a social worker and resident of Newcastle upon Tyne, England, recalled that in the time before his arrest, “the Israeli forces behaved with particular aggression towards protesters who were carrying the posters of Kayla and of the students from Chapel Hill North Carolina.” Border police threw stun grenades directly towards demonstrators, scattering those holding posters near the front of the protest.

“Next thing I knew,” Mick recalled, “three or four soldiers jumped on me from behind and forced me to the ground. I was lying face downwards, with a couple of them kneeling on my back. 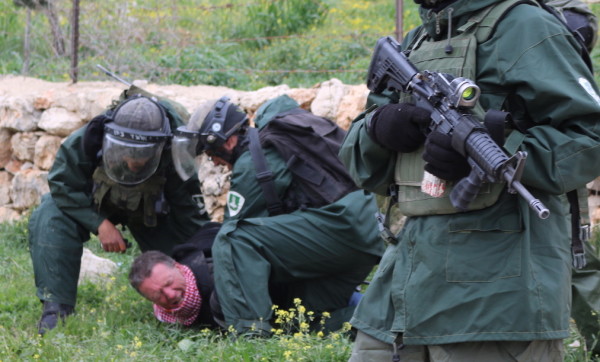 As they were handcuffing me, one of them stood on my hand, rubbing his boot back and forth and crushing my thumb. One of them grabbed my nostrils, and another was pressing down on my face, causing abrasions and bruising around my right eye. After they had handcuffed me, a border policeman also pepper sprayed the left side of my face from the distance of a few inches.” 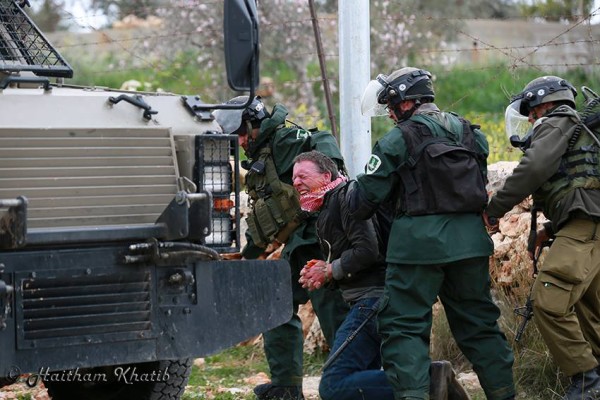 Mick Bowman being dragged to the military jeep, just after being pepper sprayed

After their arrest, Mohammed and Mick were transported to the Binyamin settlement police station. Mohammed Khatib was taken to Ofer military prison and Michael Bowman was taken to Muskubiya (the Russian Compound) prison in Jerusalem. Both were charged with ‘assaulting a soldier.’

Abdullah Abu Rahma, head of the Bil’in popular committee, described the purpose of demonstration in Bil’in: “On Friday we protested against the theft of our land by Israel’s illegal wall and settlements and to express our resistance to terrorism everywhere. We carried the images of Kayla Mueller who was killed while being held captive by Da’esh and who had marched with us in Bil’in. We also carried the images of Deah Barakat, Yusor Mohammad, and Razan Abu-Salha, who were murdered in their home in North Carolina. We made it clear that we will oppose terrorism and the killing of innocent people whether it is committed by organizations like Da’esh, by states like Israel or by individuals like the murderer from Chapel Hill.” This Friday will mark the tenth anniversary of Bil’in’s popular resistance demonstrations – against the Apartheid Wall, against the Israeli occupation, and against oppression and violence everywhere. 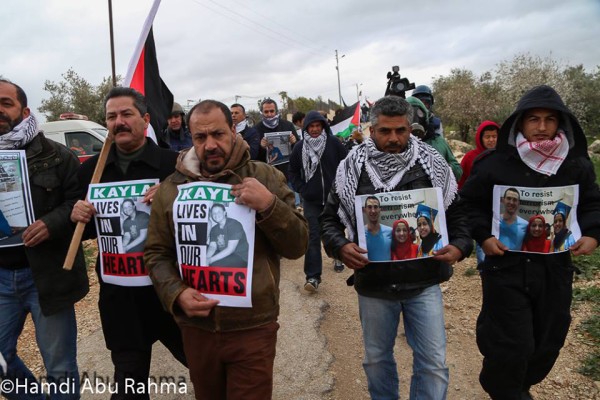 Palestinian demonstrators holding posters of Kayla and of the three murdered in North Carolina. The one of the Chapel Hill students reads “to resist terrorism everywhere”