On 29th December, Israeli military barricaded the village of Deir Istiya, Salfit with a roadblock.

This type of roadblock, termed an ‘earth mound’, is a pile of rubble and earth dropped over the road to obstruct access. 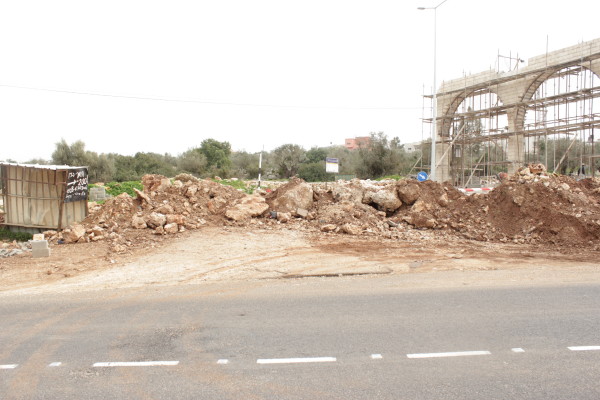 It prevents access from the village to the main road towards Nablus and Qalqilyah where many Deir Istiya residents work and study. Residents and visitors must use the southern route to get in and out through the village of Hares. Hares is a small village with narrow winding roads. The increased traffic through Hares causes congestion and increases risk of car accidents. The diversion of at least 8 km adds to fuel costs as well as journey time.

On the 4th January, a 58 year old resident of Deir Istiya suffered from a heart attack. The increased time to reach Nablus hospital could have proved fatal. The patient is still in intensive care in Nablus hospital.

Residents of the village managed to reopen part of the road a couple of days after it was blocked. The army returned and only fortified it with even larger boulders that were impossible to remove by hand.

Villagers say the army closed the road as ‘collective punishment’ for a youth who had thrown a Molotov cocktail at a car passing from a nearby illegal Israeli settlement but no arrests have been made. There are 5000 people living in the village of Deir Istiya. This kind of collective punishment is illegal under international law, breaking Article 33 of the 4th Geneva Convention.

The roadblock was partially removed late last night by the Israeli military, possibly after pressure from human rights organizations including the Red Cross. This now allows vehicles precarious access to the main road to Nablus. The blockade however, still obscures most of the access into and out of the village, particularly problematic in emergency situations, and for parents with children, the elderly and disabled.

The road was last closed in November under similar circumstances.