New
Home / Hebron / VIDEO: “They look like they’re in a war zone, but what they’re aiming at is five-year-olds”

VIDEO: “They look like they’re in a war zone, but what they’re aiming at is five-year-olds”

By 10:30 am on Tuesday morning of December 30, Palestinian children attending school near Qeitun checkpoint in al-Khalil (Hebron) had endured over forty tear gas canisters, multiple rounds of rubber coated steel bullets and stun grenades, and the arrest of a twelve-year-old boy.

Israeli forces fired down the road leading from the checkpoint to the schools, filling the street adjacent to the schools with a choking cloud of gas and preventing Palestinians walking through the checkpoint from continuing down the street. As it is exam season in al-Khalil’s schools, children were attempting to reach school between seven and eight am and leaving again between nine thirty and eleven. Israeli military forces kept up a sporadic barrage of fire from the time some children were still walking to school until after school finished, forcing anyone traveling in either direction to brave whistling tear gas canisters and the dizzying smoke which still lingered even after the shooting had halted. 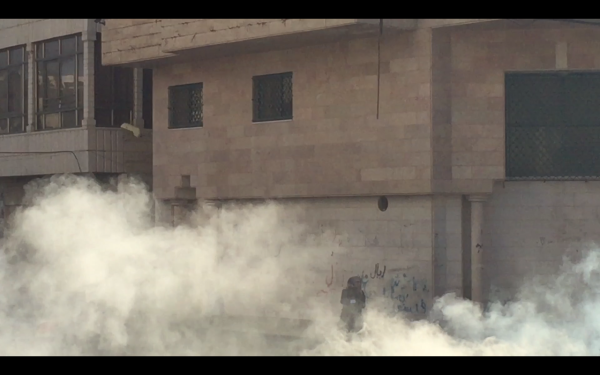 Early in the morning, Israeli occupation forces grabbed the twelve-year-old near the checkpoint, accusing him of throwing stones. Eyewitnesses present at the scene denied the accusation. After they took the young boy away to the police station, Israeli army and border police advanced further down the road away from the checkpoint, heavily armed with tear gas, stun grenades, and the long rifles used for firing rubber coated steel bullets. Sometimes they fired systematically, setting off five or more rounds of tear gas at a time; at other times it seemed bizarrely random, as when a single border policeman would suddenly run up the street and fire off a tear gas grenade at the distant crowd of children. 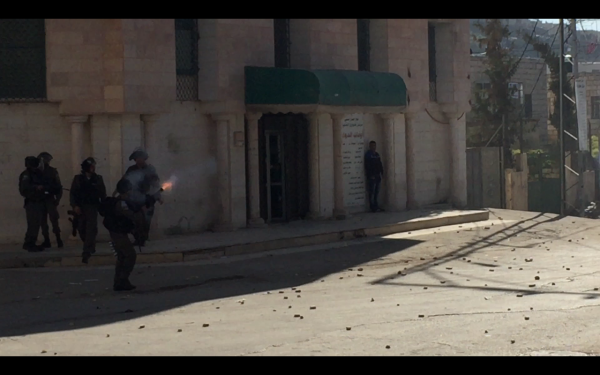 In between assaults, when the Israeli military temporarily halted their fire, young boys kicked stun grenades around and tried to squash tear gas grenades with their shoes. Many of them were stuck, waiting behind and among the soldiers as lingering clouds of tear gas fogged the road in front of their school. Looking down the road from near the military’s position to where the tear gas was landing, one could catch glimpses of the impacts: a small child coughing, a teacher dodging the falling tear gas canisters.

Israeli forces advanced down the main road, standing menacingly across it and also occupying the corners of side-streets, aiming their rifles up towards nearby neighbourhoods. Some stood far down the street, partly hidden by a parked car, in the same location where Israeli border police had arrested a seventeen-year-old boy a couple of weeks earlier. “They look like they’re in a war zone,” one ISM activist commented at the scene, “but what they’re aiming at is five-year-olds.”

As some of the ISM activists walked home, travelling up through the souk (market) in al-Khalil’s Old City, they asked if the tear gas from the area around Qeitun checkpoint had reached all the way up to the shops. “Not too much today,” one shop owner replied. He asked how the activists were. After they gave a brief summery of their morning, he responded matter-of-factly: “there’s always tear gas down there.”

It is a fact of life in al-Khalil – one which perfectly illustrates the senseless, violent injustice so characteristic of the zionist occupation. This morning is only one of countless violent mornings and afternoons these children will face along their everyday route to school. Military assaults and checkpoints are as familiar to them as their daily assignments and schoolbooks. These repeated attacks expose the absurd lengths to which the Israeli occupation has invaded the lives of Palestinians, when even the road to school becomes a battlefield.