Mohammad Saleh, a sixty-six-year-old Palestinian resident of Tel Rumeida, al-Khalil (Hebron), waited with his mule outside Shuhada checkpoint for nine hours over the course of two days. He spent four hours waiting before being allowed through on Monday (15/12/14) evening. 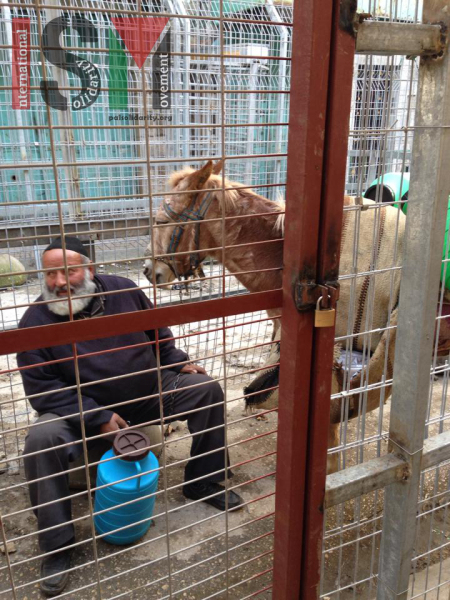 He then spent five hours Tuesday (16/12/14) attempting to cross in the opposite direction before eventually turning back, after being denied repeatedly by Israeli forces claiming that donkeys, mules, horses, and carts are not permitted to pass through the checkpoint. 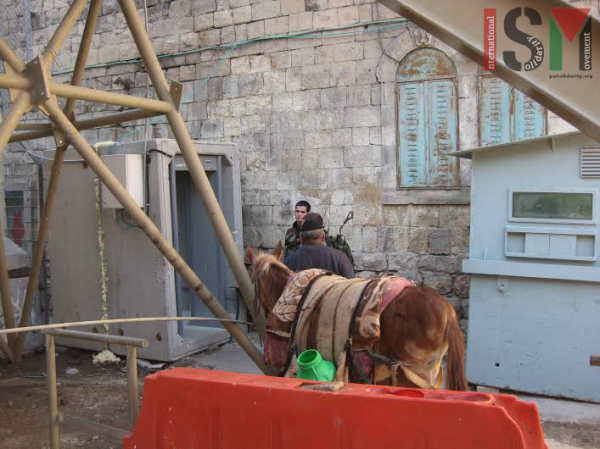 Shuhada checkpoint serves as the only clear passage between the H2 (Israeli-controlled) neighbourhood of Tel Rumeida and the H1 (Palestinian Authority-administered) neighbourhood of Bab Al-Zawiye, a route many Palestinians must traverse regularly in the course of their work and daily routines.

Mohammad arrived at the Bab Al-Zawiye side of the checkpoint at 13:40 on Mondayafternoon, his mule laden with empty milk jugs and saddlebags packed with various provisions. Israeli forces refused to let him through, claiming no animals were allowed past the checkpoint – a claim no one, including other international organisations at the scene as well as the Palestinian District Coordination Office for al-Khalil, had ever heard before. 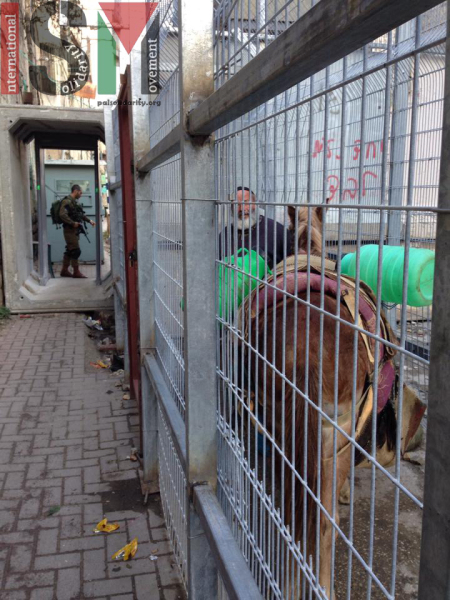 Mohammad explained that he had been allowed pass the checkpoint on Monday morning, with the promise that he would be let back through later in the day. When he returned, he found a new shift of soldiers and no one willing let him pass. The soldier manning the checkpoint claimed he needed permission from his commander to open the gate, which would allow Mohammad to pass with his mule.

An ISM volunteer at the scene later received a call explaining that the Israeli military’s new rule stated that horses, donkeys and mules were not permitted to pass through the checkpoint. No one, however, was able to explain why Mohammad had been allowed through that morning, but denied on his way home. “Look at my ID,” he told the soldier at one point, “I’m in your computer. I go through here all the time.”

He stayed waiting, sitting beside his mule on the cold concrete base of the fence, even as the afternoon turned into evening. The sky grew dark, though the lights from the checkpoint still illuminated the fences,
turnstiles, and barbed wire. Even the soldier seemed concerned, telling him to please go home, as it was cold and late and staying would not help him. But Mohammad had already made it clear he would not leave. About ten minutes later the soldier finally opened the gate, saying it was the “last time” the he would be allowed through. Although Mohammad heard the soldier’s message, it was clear he would not heed it. He intended to continue to resist, no matter what anyone told him.

Sure enough, the following morning he was once again standing outside the checkpoint, this time on the Tel Rumeida side, with full milk jugs tied to the back of his patient mule. The soldiers presented multiple reasons from denying him passage, from a prohibition on taking anything through the checkpoint too large to be carried through the turnstile, to the new rule against allowing donkeys, horses and mules through. ISM volunteers attempted to find a solution, offering to carry the milk jugs around the checkpoint and meet Mohammad and his mule on the other side. The Israeli soldiers manning the checkpoint rejected all suggestions.

“Is the donkey the problem or the milk the problem?” One ISM activist eventually inquired.

“The donkey’s the problem,” a soldier replied.

The animal could have easily passed through the metal detector; only last night ISM activists had witnessed the ludicrous sight of Mohammad’s mule strolling through the concrete structure, empty milk jugs banging against the corners of the gateway. The turnstile served as the only obstacle to the his passage – an obstacle the soldier could easily remove by opening the gate on the other side of the metal detector and letting the mule pass around the turnstile and into Bab Al-Zawiye.

After five hours of waiting, Mohammad’s comment seemed by far the most accurate. “The soldiers are the problem,” he had responded in Arabic.

Barring donkeys, mules, and horses and carts is only the latest in a string of frustrating, humiliating regulations imposed on the people living near the checkpoint, who must pass through to work, study, and shop for essentials such as fresh food. Just a few days earlier a group of elderly Palestinians, ill people, young children, and teachers at a local school had also been forced to wait, some for up to three hours, before being allowed through.

When Israeli forces shut down the checkpoint after it was burnt nearly a month ago , barring most people from passing through for over three weeks, the Palestinians were forced to adapt. Local people know ways around the checkpoint; several paths lead through local families’ yards and over the walls and rubble between Tel Rumeida and Bab Al-Zawiye. These “rabbit runs,” however, are entirely unsuited to traveling through with a mule – as well as for anyone sick, elderly, or carrying large heavy objects.

Since the attempted burning of the checkpoint, the Israeli military rebuilt it larger and with more obstacles for anyone traveling through. One side now has a metal detector, and both sides are equipped with vertical metal turnstiles which are a major impediment to anyone trying to move through with large baggage. Soldiers continue to use the burning of the checkpoint to justify collective punishment imposed on the entire Palestinian population – young and old, men and women, healthy and ill – who live or work near the Shuhada checkpoint.

Any Palestinian might be stopped while attempting pass through.  Even with the checkpoint officially open, far too many are.  Soldiers regularly search bags and make people remove their belts and empty their pockets before being allowed through. These everyday humiliations accompany frequent ID checks and detentions, serving as an inescapable reminder of the illegal Israeli occupation. Soldiers present at checkpoints routinely cite newly imposed rules and orders from superior officers as reasons for denying people passage, but whether someone passes easily through a checkpoint or must wait for hours often seems to be determined by nothing more than the soldiers’ caprice.

Many Palestinians must pass through Shuhada checkpoint multiple times in a day, carrying items as diverse as fresh vegetables, tubs of oil, and gas for cooking and heating their homes. During the hours ISM volunteers stood waiting with Mohammed, they witnessed multiple people struggle with the cumbersome design of the rebuilt checkpoint. One woman was carrying too many grocery bags to be able to fit into the turnstile. Someone on the other side of the turnstile had to reach a hand between the metal bars and move one bag through, returning it to the woman once she had passed. Another Palestinian, this time a young boy, needed the help of multiple passers-by over several minutes to figure out how to get two tubs of oil
and a metal trolley through the turnstiles. Soldiers denied passage outright to boys who wanted to walk through the checkpoint with their bicycles. 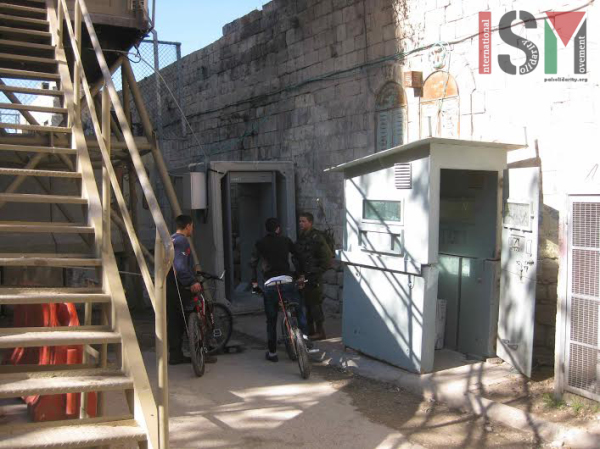 At one point on Monday night, a group of off-duty soldiers ran up Shuhada street and stopped near the checkpoint to rest, stretching and laughing, their easy freedom of movement a stark contrast to experiences of Palestinians struggling through Shuhada checkpoint. Almost all of Shuhada street has been closed off to Palestinians, reserved instead for the settlers and soldiers occupying H2. Even Palestinians who manage to get through the checkpoint must pursue long, circuitous routes between the surrounding areas of al-Khalil. Many, especially the elderly or disabled, are effectively barred from traveling to significant portions of the city their families have lived in for generations.

“I want to resist,” Mohammad told the ISM activists the first day they waited with him. He made sure the man translating said it twice, to make sure the ISM volunteers understood. “I want to resist,” he said, after
over three long hours of waiting to be allowed through.