UPDATED: Palestinians continue the struggle against the Adei Ad outpost

Palestinian activists Mohammed Khatib and Jaffar Hamayel, both arrested on December 19 while peacefully demonstrating in Turmusaya, were released today, December 22, on bail of 7500 shekel each.

“Ziad was planning to plant olive trees on private Palestinian land near the illegal outpost of Adei Ad, but was violently prevented from reaching the site by the Israeli military who assaulted and killed him. We thought that after killing the minister, yesterday the military would allow us to plant trees peacefully but we found the same soldiers prepared to use even more violence against us,”  Said human rights defender Abdullah Abu Rahmah.

“Despite the occupation forces’ violence, we planted trees in the place where Ziad had planned to plant them. Despite their violence, we will continue to struggle with the farmers whose land is stolen and the farmers who are prevented from cultivating their land by the occupation. ” Abu Rahmah was injured by a stun grenade that was thrown directly at him while he was planting an olive tree.

After praying near the spot where the minister was stopped by the army, protesters with olive trees climbed the hill to the site where Abu Ein had intended to plant trees.  They began planting under a barrage of tear gas, stun grenades, and beatings by Israeli border police. 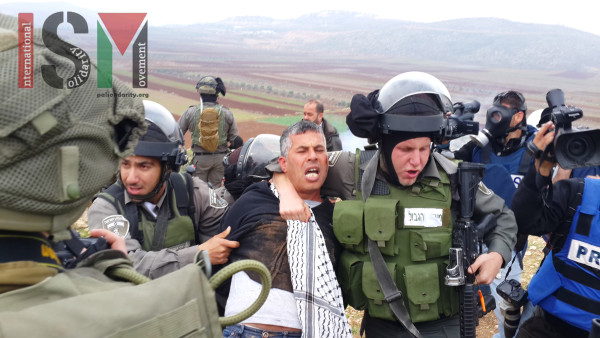 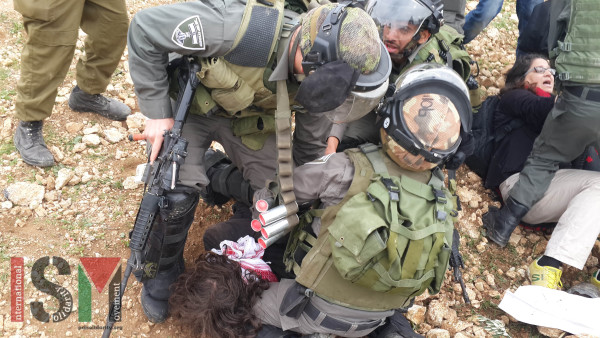 Danika Padilla, to the left, and Neta Golan as they are arrested.

In another area of the protest, youths responded to the military assault with stones as the army sprayed demonstrators with putrid water known as “skunk”, fired rubber-coated steel bullets and .22 caliber live ammunition. Many demonstrators suffered severe tear gas inhalation and two Palestinians sustained leg injuries from the .22 bullets.

The four arrested activists were taken to the Binyamin settlement police station. Neta and Danika were released in the early hours of this morning. Mohammed and Jaffar have been charged with assaulting and disturbing the border police and rioting after being told to disperse. They were taken to the Russian Compound police station in West Jerusalem  where they remained in detention until their court date at Ofer military court. 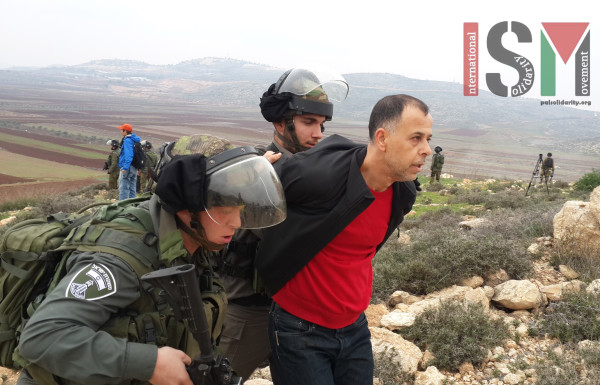