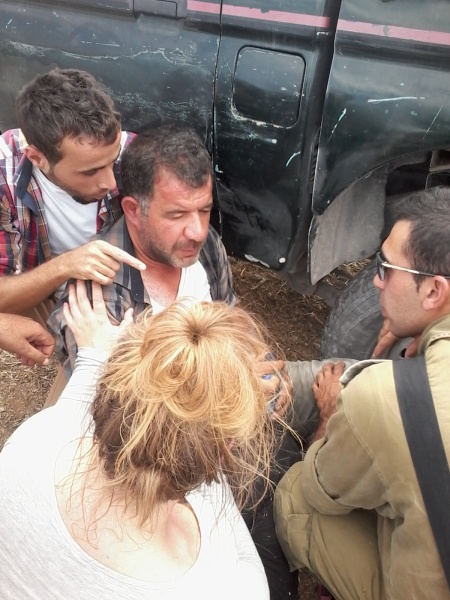 On Monday morning, the 29th of September,  settlers and the Israeli army invaded the village of Khirbet Al-Tawil east of Aqraba. They destroyed the village’s main electrical cable and water pipe. The inhabitants of the village have been without electricity and running water since then.

The Israeli soldiers took the Palestinian’s ID from him and forced him to drive his motorbike in front of the military jeep to the Alhamra checkpoint for interrogation. During the drive, a car with one Palestinian, one international and three ISM activists stopped to give the man some water. The Israeli soldiers stepped out of the jeep and yelled orders to the group, trying to prevent them from giving the man water. The man was shaking and while drinking the water he collapsed on the road, suffering from an epileptic seizure.

The Israeli soldiers came closer and interrupted the group that was trying to give the Palestinian first aid. Even though his condition was serious the soldiers did not call for help until the group started working on getting an ambulance. Then the Israeli solders called for backup and medical help. At that time the man was still cramping and fighting to catch his breath. One soldier stayed with the man to prevent him from escaping and the other soldiers stood by and laughed.

After about forty minutes a military ambulance followed by a group of more soldiers arrived. The man was stable at that time, but still suffering from the aftereffects of the seizure. A woman dressed as a soldier, identifying herself as a doctor took a quick look at the patient where he was sitting on the road after denying taking him inside the ambulance, even though the sun was very strong at that moment and not helping his condition.

An Israeli military commander arrived at the same time as the ambulance. He commanded the group of Palestinian, civilian and ISM activist who were taking care of the man to back off. One ISM activist refused to leave the patient and was immediately surrounded by armed soldiers. The Israeli commander became aggressive and forced the patient to stand up and walk to the military jeep and get in between two soldiers. Right before they drove away, on ISMe activist noticed the soldiers handcuffing the Palestinian. The man was released later that day.