Yesterday at approximately 10 PM in the Qeitun region of Al-Khalil (Hebron), a group of 6 Israeli soldiers accused 14-year-old Amjad Taha of throwing fire crackers at them outside of his home. Amjad’s cousin, Muhammad Taha (17 years-old), was standing close by with his 2-year-old cousin when the Israeli soldiers began to aggressively grab Amjad. A few of the soldiers then grabbed Muhammad, who was still holding his baby cousin. The soldiers began to take Amjad, Muhammad, and their baby cousin away from the front of their house. 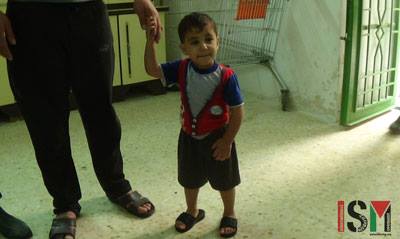 The three blindfolded Palestinians were then taken to Shuhada checkpoint in Tel Rumeida and transferred into Israeli police custody. The Israeli police took all of them to the police station by Ibrahimi Mosque in H2 for questioning. Amjad and Muhammad were held there until 1 in the morning. Osama Taha was kept in the police station and then transferred to a prison near Bethlehem where he is currently being held without charge. Osama’s brother told ISM activists: “I can’t believe they still have him. He didn’t do anything. He was just trying to protect his nephew. Osama has learning disabilities. I really fear for how this will affect him and how they will treat him.”

As a result of the Jewish holidays, the amount of soldiers in Al-Khalil (Hebron) has increased immensely. The Israeli army enters Palestinian neighborhoods almost weekly, detaining and arresting Palestinians without cause or reason. This method of harassment is one of many tools that the Israeli army uses in an effort to force Palestinians out of their homes.