“Demonstrating against the occupation cannot be a criminal offence. Finding Abdallah guilty only shows that the [Israeli] military force is a tool to perpetuate the occupation.” Stated Gabi Lasky, lawyer of Abdallah Abu Rahma, to the International Solidarity Movement (ISM). 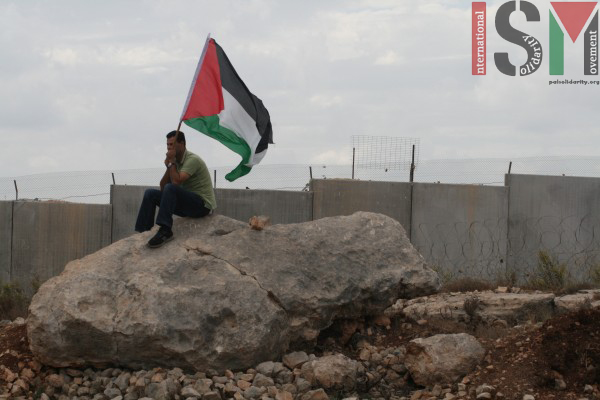 Abdallah at a demonstration in Bil’in on November 9th, 2012.

Abdallah spoke to the ISM about his recent conviction. “Yesterday the military court ruled that I was guilty, showing once again that they stand on the side of the occupation, and not that of truth and justice.

I was arrested on the 13th of May 2012 in front of Ofer Military prison at a demonstration commemorating the Nakba and in solidarity with the prisoners, many of who were on hunger strike. I was imprisoned in Ofer for 16 months a year earlier, for my role in the non-violent demonstrations in my village, Bil’in, against the Apartheid wall and settlements built on our land.

This time when I was arrested I was held for a few hours and released on bail, I was not summoned to court until the beginning of 2013, following the success of the popular committees in the construction of the Palestinians villages Bab Al Shams and Bab Al Manatir.”

Abdallah Abu Rahmah is the coordinator of the Bil’in popular committee, which began popular demonstrations against the Apartheid wall and settlements in January 2005. The route of the Apartheid wall originally planned to separate the village form 50% of its agricultural land. As a result of the village’s continued popular struggle, the route was changed and 25% of the village land was effectively annexed by the wall to the illegal settlement of Modiin Elite.

Hundreds of protesters have been arrested and injured by Israeli forces in Bil’in since the popular struggle in the village began. In 2009 during a demonstration, Bassam Abu Rahmah was shot directly in the chest with a high velocity tear-gas projectile, dying of his wounds minutes later. On Januray 1st 2011, Jawaher Abu Rahmah died of poisoning after inhaling excessive amounts of tear gas during the weekly demonstration the previous day.