Yesterday, 300 orphans staged a protest following the demolition of Al-Rayyan Dairy Factory, north of Hebron, which occurred in the early hours of 1st September 2014. The dairy factory, which housed 150 cows and produced six tones of milk products, such as yogurt and cheese, had run for 24 years, ever since the Islamic Charitable Society received funding from the Kuwait government in 1991 to set up the factory. The purpose was for the Society’s orphanages and schools to have their own source of regular income, rather than relying on donations. The dairy products were distributed to Hebron and the surrounding villages.

The Israeli government, since 2002, has targeted the dairy factory. The first demolition order was based on concerns about environmental regulations, saying that the waste produced by cows was not dealt with suitably. Despite solving this problem, the dairy farm continuously fell under threat by the Israeli military, especially since it was located in Area C, the area of the West Bank completely under Israeli military control. Claims were also made by the Israeli Council for Planning that parts of the farm were illegally built; however, Abed Al-kareen Farrah, one of the lawyers working with the Islamic Charitable Society, confirmed that the farm received approval from the Israel Antiquities Authority for a license to build. He said, “The farm has been under fire for years with a lot of administrative issues, and Israel constantly put pressure on it to close.”

In June 2014, the dairy farm received a second demolition order, accusing the Islamic Charitable Society of having affiliation with Hamas because one of the dairy farm’s workers had been an administrative detainee for the past twenty months. The Chair of the Islamic Charitable Society’s Board of Directors, Hatim al-Bakri, stated that the society is not funding Gaza. On the 3rd of July 2014, Israeli forces confiscated all of the farm’s machinery before demolishing the entire farm a few days ago. 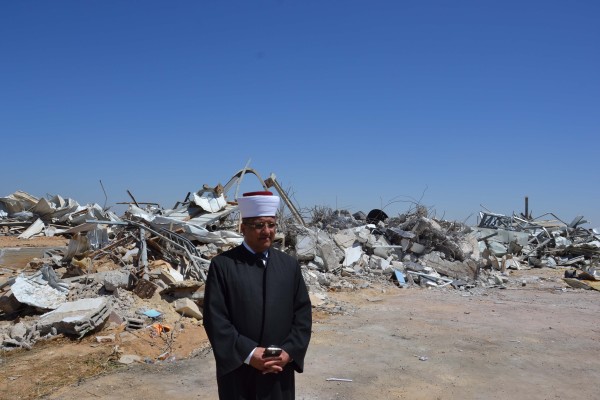 Hatim al-Bakri added that the farm would be impossible to rebuild, not only because it would cost two million dollars to do so, but also because of the heavy resistance they would face from the Israeli forces. Anything built on that plot of land would risk being demolished again and again.

“The future is dark for the orphans in Hebron,” he says. “I don’t know how we will be able to continue to fund the orphanages, or the seven schools the Islamic Charitable Society runs in and around Hebron. This question should be asked to the occupation.”

The demolition of the dairy farm is yet another example of how collective punishment affects hundreds of Palestinian people every day. Not only does the entire workforce of the farm have to lose their jobs because of one administrative detainee working there, but children, far removed from the workings of the farm, will also suffer the consequences.