On Sunday evening, as the sun slipped behind the Mediterranean Sea, members of the Bakr family, a sprawling clan of fishermen in Gaza City’s Beach refugee camp, gathered with hundreds of supporters on the beach next to the Gaza seaport. 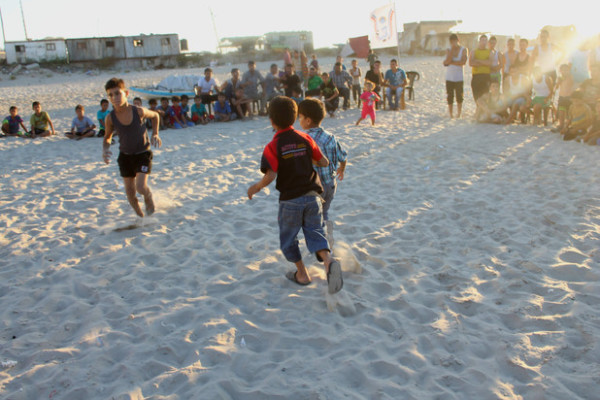 Young relatives of four children killed by Israeli shelling while playing football on a beach in July play their game that was violently cut short, 7 September (Joe Catron)

All four were killed in Israeli strikes as they played football on the beach on 16 July. The first blast killed Ismail as he ran to retrieve a ball. Ahed, Zakariya and Muhammad died in the second explosion.

The Israeli munitions that ended their lives struck the beach directly behind a row of hotels which, in mid-July, housed many of the foreign reporters then present in Gaza.

Along with statements by members of their family and the painting of colorful murals at the site of the boys’ killings, the event also included a football match, intended to complete the one interrupted by the lethal blasts almost two months ago.

“It was never finished,” Bayan al-Zumaili of the Safadi Group, the youth organization that worked with the Bakr family to organize the event, told The Electronic Intifada. “So we decided to complete it with the survivors of the massacre.”

Al-Zumaili, a physician who graduated from the Islamic University of Gaza’s medical school two months ago, volunteered in the surgical department at al-Shifa hospital during Israel’s 51-day offensive against the Gaza Strip, which ended in an indefinite ceasefire on 26 August.

By 25 August, Israeli attacks had killed at least at least 2,168 Palestinians in the Gaza Strip, including 521 children, according to Gaza’s al-Mezan Center for Human Rights.

The number of child fatalities has risen to at least 523 with the deaths of Ziyad al-Reefi, age nine, on 1 September, and Rahfat Abu Jame, age five, on Tuesday. Both died of injuries from Israeli attacks.

The killings of the Bakr boys in July drew broad attention not only because a single incident caused the deaths of four young relatives — a scenario repeated numerous times throughout the onslaught — but also because it took place so near to where so many journalists were staying.

Eyewitness accounts of the massacre by journalists like Sara Hussein of AFP, Peter Beaumont of The Guardian, Tyler Hicks of The New York Times, and William Booth of The Washington Post reached much larger audiences than first-hand reports of similar mass killings elsewhere.

NBC briefly pulled from the Gaza Strip its correspondent Ayman Mohyeldin, who tweeted: “Minutes before they were killed by our hotel, I was kicking a ball with them.” NBC’s removal of their star foreign correspondent was attributed by many to his blunt coverage of Palestinian deaths on social media and was widely criticized by other journalists.

While many reporters witnessed the killings, some also helped evacuated three survivors from the beach and gave them first aid inside al-Deira hotel.

“They targeted us knowing that we were children, playing a game of football on the beach,” one survivor of Israel’s missile strikes, eleven-year-old Motasem Bakr, said Sunday. “The [armed] resistance was on the frontiers fighting them, not here playing football.”

“An Israeli officer did not like the idea of children playing,” he added.

In place of the martyrs

According to Defence for Children International – Palestine, Ismail, Ahed, Zakariya and Muhammad were pronounced dead upon their arrival at al-Shifa hospital.

“Israeli forces continue to target and kill children and civilians on a daily basis, making Israeli military statements claiming that these deaths are tragic mistakes simply meaningless,” DCI-Palestine executive director Rifat Kassis said in a statement the next day. “The death toll among children now stands at its highest point in five years.”

Along with two other survivors of the attack, Motasem joined three other boys from the Bakr family and six others from the devastated Shujaiya neighborhood, on the eastern edge of Gaza City, to complete the football match they had never finished on 16 July.

“In the place of the martyrs who couldn’t attend, we brought survivors of the Shujaiya massacre to complete the match for them,” al-Zumaili said.

Dozens of Palestinians died over the course of days of Israeli shelling, airstrikes,and gunfire in Shujaiya in mid-July. The bombings reduced much of the neighborhood to rubble.

Since the 26 August ceasefire, hard-hit areas like Shujaiya, Beit Hanoun and Khuzaa have at times resembled army encampments; their streets thick with tents erected by grieving families to host mourners and those offering their condolences.

As families mourn their losses, and injured Palestinians succumb to their injuries, Gaza’s ongoing process of collective grieving will also continue, sometimes in the somber reflection of mourning tents, sometimes in the simple joy of an evening football match on the beach.