Update:  Please help us spread the word in Arabic, Italian, French, Hebrew and Spanish via your networks.

Hundreds of thousands of people worldwide have taken to the streets in response to a call from Palestinian civil society in the occupied and besieged Gaza strip, and the BDS National Committee (BNC), for a day of rage. 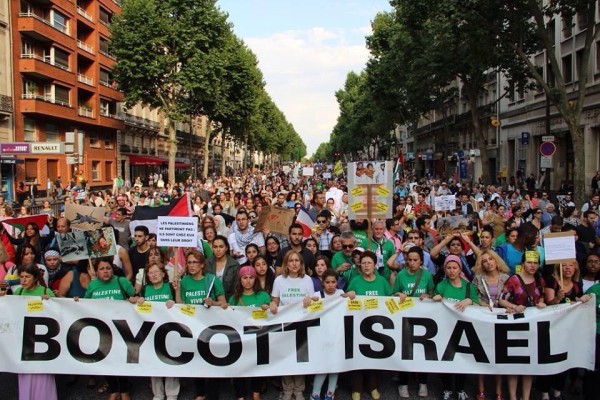 The mobilisations come as grassroots pressure mounts on western governments to impose a military embargo on Israel.

On the 31st of July, Spain announced “provisional” suspension of military exports to Israel. On August 7th, Evo Morales, president of Bolivia, became the first head of state to declare his support for Boycott, Divestment and Sanctions (BDS).

Dr Haidar Eid, a Gaza based steering committee member of the Palestinian Campaign for the Academic and Cultural Boycott of Israel stated, “the masses that demonstrated their support today for Palestinian rights remind us of the demonstrations in the 80’s against Apartheid. This is our South African moment. Just as the South African anti-Apartheid movement and international support brought an end to the Apartheid regime, Palestinians, with the support of people of conscience worldwide, will bring an end to Israel’s multi-tiered system of oppression. Governments across the world must act in accordance with the will of their people and hold Israel accountable, including imposing sanctions and a military embargo on it to end its criminal impunity.”

Palestinian civil society based in Gaza said in their call:
“As we face the full might of Israel’s military arsenal, funded and supplied by the United States and the European Union, we call on civil society and people of conscience throughout the world to pressure governments to sanction Israel and implement a comprehensive arms embargo immediately. Take to the streets on Saturday 9th of August with a united demand for sanctions on Israel.”
BDS Gaza Global Actions Haidar Eid 2014-08-10
ISM Media