Yesterday at approximately 5:30 PM in the old city in al-Khalil (Hebron) settlers from the illegal settlement of Beit Hadassah threw rocks and water at Palestinians living on Shalala Street. This is a regular occurance for Palestinian families living close to illegal settlements in al-Khalil. The majority of the time the Israeli military watches from a distance and does not do anything to intervene in the violence and property damage.

One Palestinian, a 35-year old man, documented the stone throwing only to be detained and then arrested by the Israeli military. The man was taken through a yellow gate to an area where Palestinians are restricted from, where the soldiers pushed him around.

The soldiers threw several stun grenades at Palestinians and internationals standing behind the yellow gate, trying to document what was happening through holes of the gate.

Two internationals walked through the checkpoint at the Ibrahimi mosque and down Shuhada street in attempt to find the Palestinian. A group of ten solders and an army jeep stood with two Palestinian men, the man who had been arrested was in handcuffs. A nearby soldier told the internationals that neither of the men was arrested but they were only bringing him the handcuffed man in for questioning, to gather evidence about the settlers who threw stones. After approximately five minutes the solders blindfolded the Palestinian and started walking with him to a nearby army base, Beit Romano. When internationals asked why the man was being blindfolded an Israeli soldier stated, “Because I want to.”

The man was released earlier this morning. 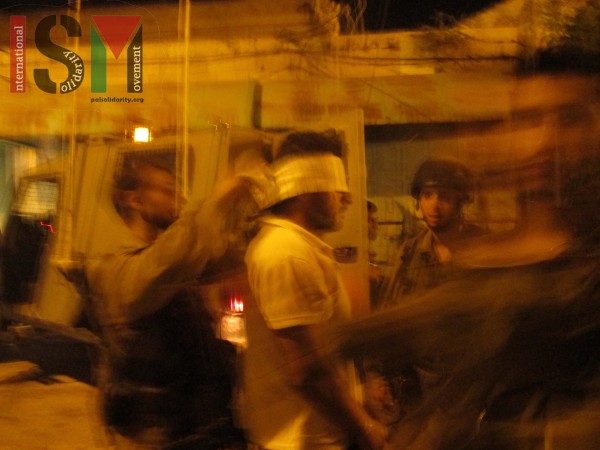