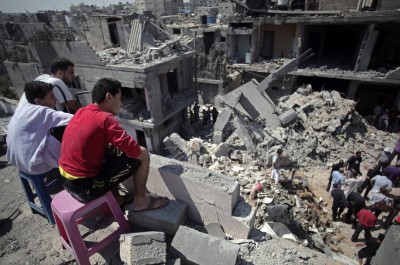 Palestinians search in the rubble of a destroyed house where eight members of the Al Haj family were killed in a strike early morning in Khan Younis refugee camp, southern Gaza Strip on Thursday, July 10, 2014. Israel dramatically escalated its aerial assault in Gaza Thursday hitting hundreds of Hamas targets, as Palestinians reported more than a dozen of people killed in strikes that hit a home and a beachside cafe and Israel’s missile defense system once again intercepted rockets fired by militants at the country’s heartland. (AP Photo/Khalil Hamra)