UPDATED: Gaza Calling: All out on Saturday 9 August Day of Rage

Help us spread the call from Gaza for a Day of Rage on August 9th. Please help share the following translations via social media:

Words alone do not do justice.

Take the streets for Gaza! 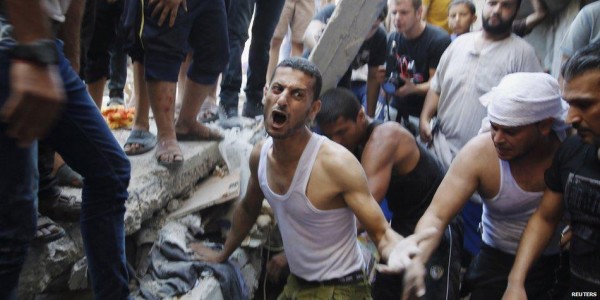 Aftermath of Israeli airstrike on Palestinian home in Gaza.

Gaza Calling: All out on Saturday 9 August Day of Rage

As we face the full might of Israel’s military arsenal, funded and supplied by the United States and European Union, we call on civil society and people of conscience throughout the world to pressure governments to sanction Israel and implement a comprehensive arms embargo immediately.

Take to the streets on Saturday 9 August with a united demand for sanctions on Israel.

From Gaza under invasion, bombardment, and continuing siege, the horror is beyond words.  Medical supplies are exhausted. The death toll has reached 1813 killed (398 children, 207 women, 74 elderly) and 9370 injured (2744 children, 1750 women, 343 elderly). Our hospitals, ambulances, and medical staff are all under attack while on duty. Doctors and paramedics are being killed while evacuating the dead. Our dead are not numbers and statistics to be recounted; they are loved ones, family and friends.

While we have to survive this onslaught, you certainly have the power to help end it the same way you helped overcome Apartheid and other crimes against humanity. Israel is only able to carry out this attack with the unwavering support of governments – this support must end.

This is our third massacre in six years. When not being slaughtered, we remain under siege, an illegal collective punishment of the entire population. Fishermen are shot and killed if they stray beyond a 3 km limit imposed unilaterally by Israel. Farmers are shot harvesting their crops within a border area imposed unilaterally by Israel.  Gaza has become the largest open-air prison, a concentration camp since 2006. This time, we want an end to this unprecedented crime against humanity committed with the complicity and support of your own governments!

We are not asking for charity. We are demanding solidarity, because we know that until Israel is isolated and sanctioned, these horrors will be repeated.

From occupied and besieged Gaza

Palestinian Students’ Campaign for the Academic Boycott of Israel