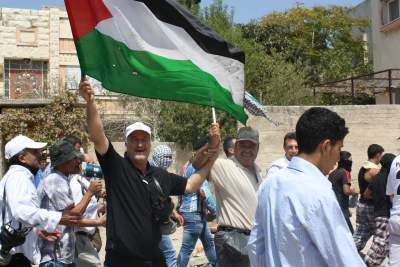 A hundred or more Kufr Qaddum villagers, accompanied by international and Israeli solidarity activists, participated in a regular protest after the prayer this Friday.

Several hours before the demo started, the village youth blockaded part of the main village road and monitored the movement of the Israeli army, who frequently positions themselves, amongst the village houses and on the surrounding hills, prior to the start of the protest

Their aim is to snatch the protesters. They fire rubber coated steel bullets and tear gas at them from close range and take pictures of the demonstrators, to use them as evidence in the occupying military courts.

When we arrived, just before the noon, there were lines of rocks placed by the villagers on the road just before where the road closure starts. The Israeli Army was in full force on the other side, with the bulldozer and Army vehicles visible from where we were. 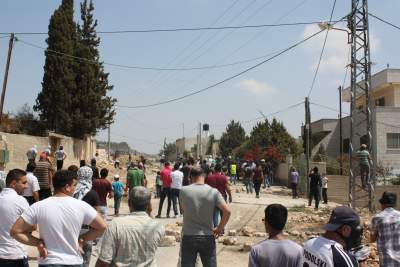 What usually happens is that the Army showers the protestors with the tear gas and rubber coated steel bullets and then the bulldozer moves in, removing the lines of rocks, followed by the vehicle blasting a foul smelling ‘skunk water’ at the demonstrators and the surrounding houses.

This time the routine changed, as the army bulldozer broke down and the Israeli Army could not make an incursion into the village. Instead, they showered the protesters with wave after wave of tear gas, while the village youth threw stones at them and at their vehicles while burning tires. 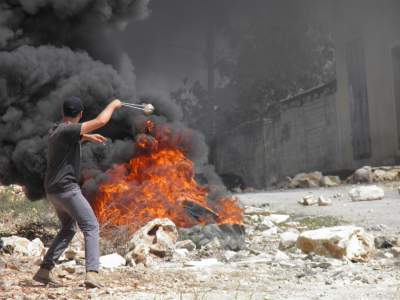 The main village road was closed in 2002 to facilitate the needs of the illegal Kedumim settlement, which has been built around the road connecting Kufr Qaddum to the nearest West Bank city of Nablus, located 9 kilometres to the east.

The closure is one of the many examples of the disruption of Palestinian daily life to accommodate the needs of the illegal settler colonizers and the occupying army. It separates the villagers from their land and made Nablus reachable only via a massive detour, which increased a travel time from 15 minutes to up to 40 minutes, tripling the price of travel.

Kufr Qaddum Friday protests which started in 2011, have become known for extreme brutality of the Israeli army response, with scores of people being injured in recent times by the rubber coated steel bullets and the tear gas canisters fired at the bodies of demonstrators. We witnessed this ourselves on Friday, inspite of this practice contravening the guidelines of the occupying Army itself. 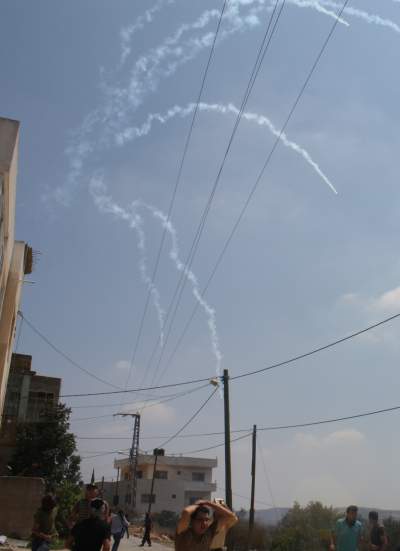 In addition in recent months, dozens of Kufr Qaddum villagers have been arrested for participating in the protests, including children as young as 10.

As we travelled back to Nablus form the demo, we had to go through two Israeli checkpoints, which were not there when we travelled to Kufr Qaddum. Long lines of Palestinian cars were made to wait, inching slowly in the afternoon heat towards where the Army blocked the road, to have their ID checked. On the second checkpoint, three soldiers were checking the IDs referring to a sheet of paper one of them held, likely with the names of the persons they were looking for. The fourth soldier was standing on the top of the nearby hill with his machine gun pointed at the line of cars and his finger uncomfortably near to the trigger.