On the 04th July 2014, at least 2,000 Palestinian mourners gathered in Shu’afat for the funeral of Mohammed Abu Khdeir, who was kidnapped last week. 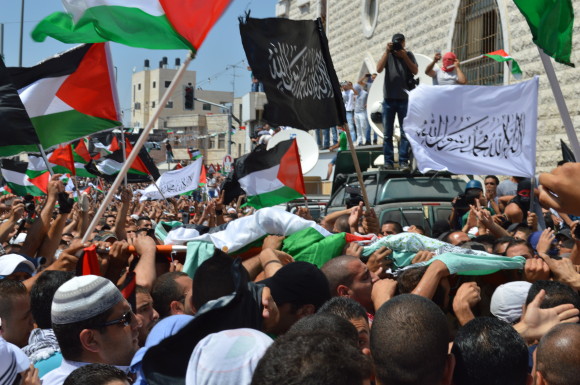 His mutilated body was later found in a forest on the outskirts of Jerusalem.  The autopsy indicates that he was burnt alive.  It is widely believed that the murder was carried out by extremist Israeli settlers.

Mourners gathered by the mosque and marched carrying the body to the burial ground.  Initially the funeral organisers formed a human chain to separate mourners and the police to prevent violence.  Later on, Israeli police clashed with Palestinians for around 12 hours.

It has been reported that at least 30 Palestinians were hurt by rubber-coated bullets while dozens more were treated for the effects of tear gas.  13 Israeli police officers were also injured. A field of wheat was also partly destroyed by fire, probably caused by tear gas canisters.

Throughout the demonstration, undercover police agents, who were also acting violently towards the police, abducted and violently assaulted at least 11 Palestinians, including Tarek Abu Khdeir, Mohammed’s cousin, who was filmed being beaten by police.

Later in the evening, local Palestinian residents took steps to remove the illegal light rail system which runs through their neighbourhood.  Two French companies, Veolia and Alstom, are subject to an international boycott and divestment campaign due to their involvement in the project. The tram primarily services illegal Israeli settlements in Occupied East Jerusalem and thereby facilitates Israel’s illegal policies of colonization and ethnic cleansing.

Local Palestinian’s pulled up bricks and cement that hold the tracks in place and damaged the tracks using an angle grinder.  Many local residents gathered round to express their support for this act of civil disobedience.  One Palestinian resident in his 60′s said that the tram “is for the illegal settlements. Israel takes our land and kills our people…we want them [the Palestinian protesters] to rip it up and take it away completely…we want rid of it”.