Yesterday, Saturday, 12th July, Jews Against Genocide (JAG) held a memorial service for Palestinian children killed by Israel in its current attack on Gaza. JAG set aflame to a pile of dolls covered in red paint at Yad Vashem, Israel’s holocaust memorial museum. JAG is a movement of Jews from all over the world, including Israelis, who are protesting against Israel’s intent to commit genocide against the non-Jewish indigenous people of Palestine. 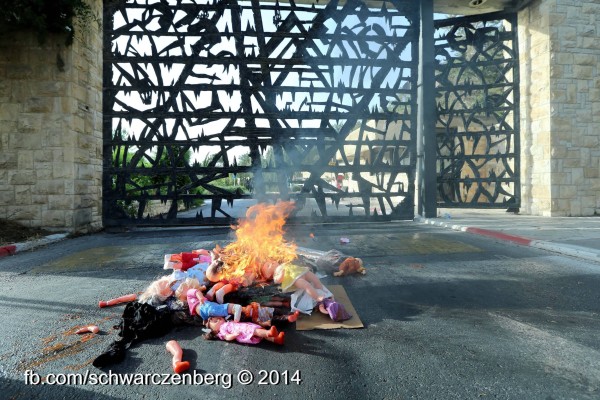 The Yad Vashem security guard attempted to disrupt the memorial, confiscated JAG’s fire extinguisher, and called the Israeli police to arrest the participants.

We brought dolls to symbolise the children of Gaza, and tried to bring a glimpse of the horror that Gazan’s face, to Israel’s doorstep. We hope to show Israel, and the world, the absurd reality of using the memory of one genocide to justify another. 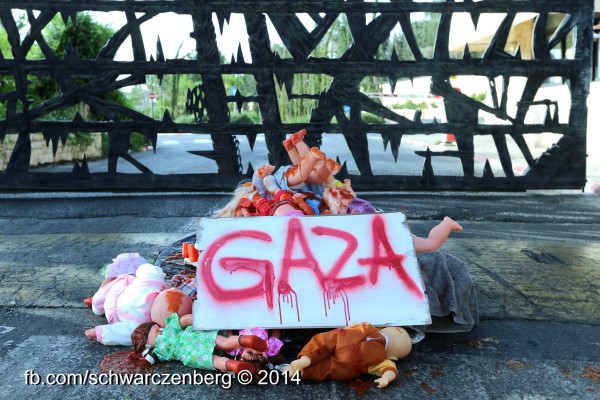 We invite compassionate people from across the globe to join the outcry by staging similar protests in front of Israeli embassies and consulates around the world on Tuesday 15th and Wednesday 16th July, 2014.

The UN Convention on the Prevention and Punishment of the Crime of Genocide defines Genocide as, “any of the following acts committed with intent to destroy, in whole or in part, a national, ethnical, racial or religious group, as such:

(a) Killing members of the group;

(b) Causing serious bodily or mental harm to members of the group;

(c) Deliberately inflicting on the group conditions of life calculated to bring about its physical destruction in whole or in part; […]“

The children of Gaza, who are being systematically murdered as we write this article, constitute 52% percent of the population under siege in the strip. The vast majority of these children are descendants of refugees from historical Palestine.

In the current round of atrocities committed by the Israel occupation army, so far dozens of children have been murdered in their homes, with Israel’s war-making leadership vowing “much higher costs” on the Palestinian side as the bombing and shelling continues.

The war crimes and crimes against humanity committed in Gaza today are the latest stage of an ongoing campaign of ethnic cleansing and genocide against the indigenous people of this land.

The Jewish State was founded on the Zionist principle of “maximum Jews on maximum land, and minimum Arabs on minimum land”, which was made reality through sixty-six years of continued assault against Palestinians, denying them the right to live freely and peacefully in their historical homeland.

The Israeli regime has turned the beautiful Gaza strip into a densely populated ghetto, with unsafe water, untreated sewage, and insufficient resources and electricity. This ghetto has become a concentration camp, through repeated Israeli massacres in what the Goldstone Report described as an effort to, “humiliate and terrorize a civilian population, radically diminish[ing] its local economic capacity.”

We express our support and solidarity for the Palestinian civil society’s call for Boycott, Divestment and Sanctions (BDS) against Israel, until it complies with the three basic demands of:

1. Ending its occupation and colonization of all Arab lands and dismantling the Wall

2. Recognizing the fundamental rights of the Arab-Palestinian citizens of Israel to full equality; and

3. Respecting, protecting and promoting the rights of Palestinian refugees to return to their homes and properties as stipulated in UN resolution 194.