Yesterday evening (July 15th) at approximately 23:05 el-Wafa Rehabilitation hospital in Gaza, near Gaza City, received a call from someone claiming to be from the “Defense department of the Israeli forces”. The caller informed the hospital to evacuate everyone by this morning, and then hung up.

At 23:10, a recorded message was left on the hospital’s answer phone stating that the downtown area of the Shajaia neighbourhood should also be evacuated by tomorrow morning. The Shajaia area is two kilometers from the hospital and has a population of approximately 100,000 people.

At 23:55, a third call was placed to the hospital from the Israeli military. This caller repeated the evacuation message, stating that it should be carried out by 08:00, “because we don’t want innocent people to get hurt, we care about innocent people, and ask you to leave because we are doing a mass operation in your area.” This message was also written on leaflets dropped on the Beit Hanoun neighbourhood two days ago.

“The patients in the hospital are already in fear. With this new threat, the terror has rocketed sky-high. There is mass confusion.” stated Rina Andolini, UK activist now staying the the hospital along with seven other international volunteers.

The board director of el-Wafa hospital called the World Health Organisation (WHO) who then contacted the Israeli military at 00:15. Israeli forces told the WHO that the hospital do not need to evacuate and will not be bombed as, “it is a hospital so we won’t bomb it”.

However El-Wafa hospital has already been struck by five Israeli missiles on 11th July, and international activists have been maintaining a constant presence ever since. 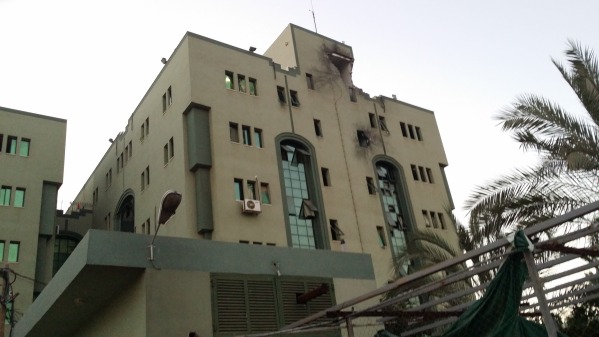 Basman Alashi, executive director of el-Wafa Rehabilitation Hospital, stated that the callers spoke in Arabic and did not give any other information, apart from the evacuation demand.

“We are not going to evacuate,” Stated Alashi. “We are staying. I believe it is part of their [the Israeli military] propaganda, part of the scare tactics they use.” 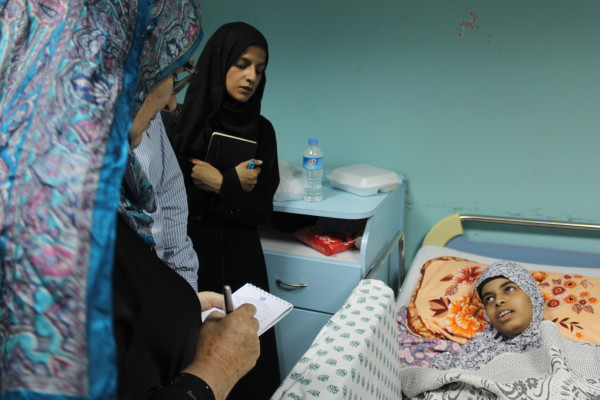 A patient at el-Wafa hospital, photograph taken by Joe Catron on July 15th