A Red Crescent paramedic, present at the Ni’lin demonstration last week, spoke to ISM about the protest last Friday, 6th June. He explained that the demonstration began as the protesters marched towards the apartheid wall, with Israeli soldiers firing tear gas canisters and rubber-coated steel bullets.

After just 15 minutes, a 41-year-old Palestinian protester was shot in the leg with a 0.22 live ammunition bullet. The soldiers had been hiding in the olive trees next to the apartheid wall and were unseen by the demonstrators. When a Red Crescent volunteer tried to give the wounded protester medical treatment, after placing a bandage on the bleeding wound, he was attacked by the Israeli soldiers. The soldiers kicked the volunteer and used their guns to beat his face, after the demonstration he was taken to the hospital to receive treatment.

The 41-year-old who was shot by the Israeli military was then arrested and held for two hours, before being ‘handed back’ to the Red Crescent ambulance at the Ni’lin checkpoint. He had received some medical treatment from the Israeli paramedics, but this wasn’t immediate, and he also had wounds, including a cut on his head that required one stitch, where the Israeli forces had beaten him while he was arrested.

The protester is now slowly recovering, the 0.22 bullet fractured his tibia [a bone in his lower leg], and it will be another month before he is healed.

The demonstration yesterday was fortunately less violent, there were no injuries or arrests. However, before the protest could begin, the military moved a long way out from the apartheid wall, pushing the demonstrators deep into their own olive trees. The military fired many tear gas grenades and canisters and some of the protesters suffered from tear gas inhalation, requiring support from Red Crescent paramedics. At least twice during the demonstration, Israeli forces fired tear gas canisters directly at protesters, both highly dangerous and in contravention to Israeli military procedure, which is shooting them up into an arch to lower the impacted velocity.

Ni’lin began demonstrating in 2008, against the apartheid wall’s construction. The protests continued after the wall was completed, and since 2008, five villagers from Ni’lin have been murdered by Israeli forces. 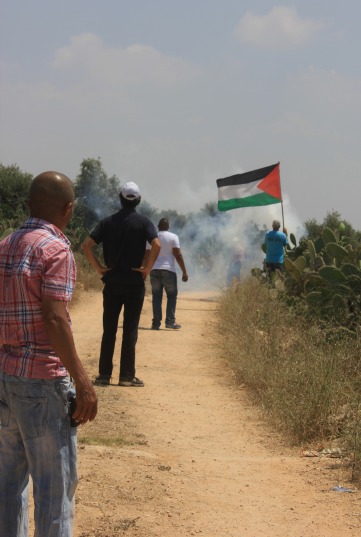 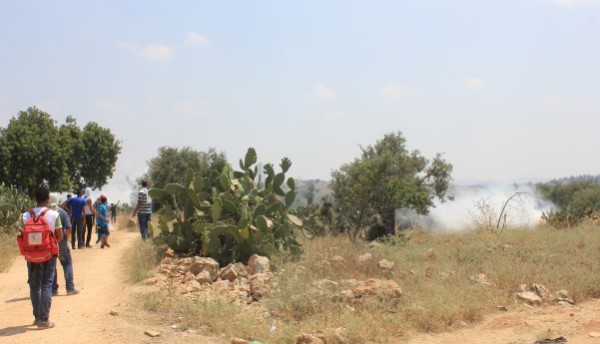