Madama, which is located 10 km southwest of Nablus, in the northern part of the West Bank, has approximately 2000 residents. The soldiers raided close to 100 homes and took 80 men to the local elementary school, where they held them for several hours. The men were blindfolded, and their arms were tied behind their backs with handcuffs.

The soldiers released all of the men at 5 a.m.

At 1:00 a.m., the soldiers invaded the house of Nizar Abdullah Sadaq Ziyaada in Madama. They asked Ziyaada about the whereabouts of his money and proceeded to ransack the house. They drilled holes into the walls and threatened to destroy his home. They found a total of roughly 200,000 shekels underneath a cupboard and in various hiding places throughout the house. Finally, the soldiers took all of the money, two laptops, and several mobile phones before leaving.

The reasons for the theft of Ziyaada’s money are unclear.

Ziyaada had worked in Israel until the year 2000 and kept all of his earnings from that time in his house in Madama. It is likely that the Israelis knew about this money, as they asked him about it as soon as they entered his house.

Hany Ziyaada’s house was invaded by 15 Israeli soldiers the same night at 1 a.m. They broke down the door, but Hany asked them to wait a few minutes, so that the women of the house could get dressed.  The soldiers swore at him, and he responded in kind. They proceeded to  kick him in the back and stomach for several minutes and dragged him to their jeep, where they continued to beat him. They blindfolded and handcuffed him and took him to the school, where they held him by the throat, forced his arms back and drove their knees into his back.  At 4 a.m. they allowed him to go home.

“Why do they not respect human rights?,” Hany asked an ISM activist. “I’m a policeman, and I know about human rights. Why don’t they?” 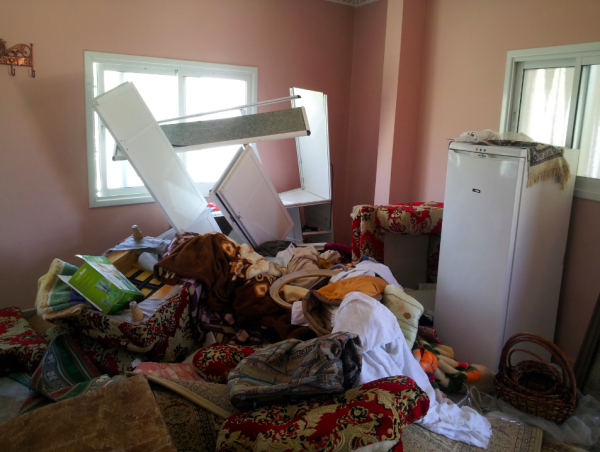