At approximately 3AM this morning, approximately 70 Israeli soldiers broke into a home inhabited by two Palestinian families. The home is located in the H1 region of Hebron, an area officially under full Palestinian authority, civil and security control.

The two families, composing of 10 people, were then asked to ‘choose’ a room in which they would all have to stay for several hours; the family decided upon a small bedroom next to the bathroom. However, they were not allowed to use it until a few hours after the Israeli military broke into the house.

The family was then told by the Israeli military that they would be occupying the house for two to three days, however the army eventually left at 1PM.

The mother of the home is very ill, suffering from diabetes, and failing kidneys. She was scheduled for a dialysis treatment for her kidneys at  a nearby hospital at 8AM, and was forced to miss this appointment, as the soldiers refused to allow her to leave her home.

When asked why they denied the mother her treatment, the soldiers claimed that she refused to go to the hospital. In addition, two other members of the family suffer from hypertension. All being denied access to medication, and medical assistance, for several hours.

Food and water were also prohibited for several hours, when friends and family attempted to bring food to those inside, they were denied until 12:30PM, 30 minutes before the soldiers left.

The purpose of these house raids seems to be due to three Israeli settler youth, missing since last thursday.

In addition, the families’ cell phones were confiscated, preventing them from interacting with those outside.

Nothing in the home was broken, however, food waste and dirt dragged in by the soldiers, remained upon their departure.

The neighbouring home also was forcibly broken into, the rightful owners of that household are currently traveling; the soldiers left the gate and front door wide open as they left.

Another home inhabited by a family of seven, further up the same road, was subsequently broken into.

Al-Khalil (Hebron), and the surrounding districts, are currently under very constricted military security, with dozens of homes in the area being broken into; and with dozens more expected to receive the same fate in the days to come. 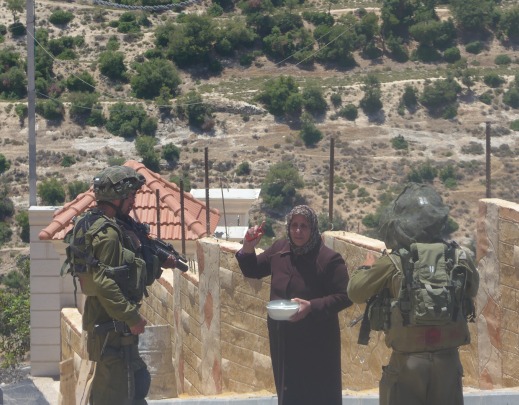 A friend of the family tries to bring food, the soldiers refuse to let her pass (photo by ISM).