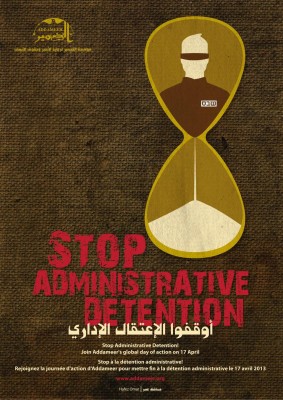 The latest wave of mass hunger strikes continue for the 14th day as Palestinian prisoners demand the end of the policy of administrative detention. Administrative detention is a procedure in which Palestinians are arbitrarily arrested and detained without charge or trial based on a secret file. There are currently 183 Palestinians under administrative detention, 9 of them members of the Palestinian Legislative Council. On 24 April 2014, the administrative detainees announced a mass hunger strike to demand their freedom. Detainees will periodically continue to join the hunger strike if the demands are not met. There are currently 95 detainees on hunger strike in Ofer, Megiddo and Naqab prisons. It should be noted that Ofer and Megiddo prisons are provided services by the British-Danish company G4S, which installed cameras and surveillance equipment used to control the Palestinian prisoners. According to one hunger striker who spoke with Addameer lawyer Mahmoud Hassan, the detainees in the Naqab Prison have all been transferred to an isolated section, separate from the other prisoners. The cells are covered in sand. They have been ill-treated; suffering from daily searches of their cells and being permitted to change their undergarments only twice since the beginning of the strike. They are bound and handcuffed in their cells for ten hours a day. Three of the hunger strikers in Naqab prison, Fadi Hammad, Fadi Omar and Soufian Bahar, are now in solitary confinement and one detainee, Ahmad Abu Ras, was transferred to an undisclosed location. Furthermore, the IPS has been denying the hunger strikers salt for the last two weeks. Prisoners who engage in hunger strikes still take liquids and salt, as they are essential for survival. Denial of salt is a continuation of the punishments against hunger strikers, and despite the grave danger  it imposes on the lives of the detainees, has been institutionalized by the Israeli Supreme Court. In 2004, the Israeli Supreme Court denied a petition by Adalah: The Legal Center for Arab Minority Rights in Israel, and several other Palestinian and Israeli NGOs that demanded the IPS provide salt on a daily basis to hunger-striking prisoners as its denial breaches the constitutional rights of the prisoner. The hunger strikers can potentially face harsher punishments if the IPS’s most recent proposed bill to legalize force-feeding is approved in the Knesset. The memorandum is currently up for public critique. In addition, 42 hunger strikers have been transferred to Ayalon / Ramleh Prison, including Abd Al Rizziq Farraj and Salem Dardasawi. On 4 May 2014, their cells were raided and the hunger strikers beaten. Mohammad Maher Badr’s finger was broken during the attack and Mohammad Jamal Al-Natsheh had to be hospitalized for the injuries sustained from the attack. The prisoners are in overcrowded isolation cells, with seven hunger strikers in each. They are in their cells at all times and denied recreational hours in the yard. Addameer maintains that the Occupation’s authorities are solely responsible for the lives of the hunger strikes. Addameer also demands that all contracting parties to the Fourth Geneva Convention pressure Israel to immediately release all administrative detainees and cease the use of administrative detention.