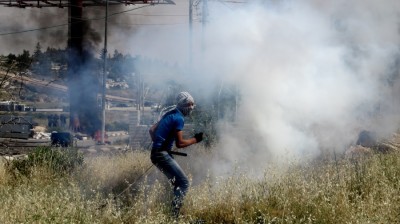 Excessive use of tear gas (photo by IWPS).

In commemoration of the 66th annual Nakba day, hundreds of Palestinian youth from the Ramallah district moved against Israeli soldiers outside of Ofer prison in Beitunya. Soldiers retaliated with tear gas, live ammunition and rubber coated steel bullets. During the clashes, soldiers killed two demonstraters, aged seventeen and twenty two.

The first, who was shot in the chest, died in hospital, while the second, who was shot in the abdomen, died in the ambulance. An additional twenty four Palestinian protesters were shot with live ammunition and rubber bullets during the confrontation, and two victims are currently hospitalized in the Intensive Care Unit at Ramallah Public Hospital. Over ten youth have also recieved medical attention for excessive tear gas inhalation.

Nakba day is the annual commemoration of the eight hundred thousand Palestinians who were forced out of their homes in Historic Palestine during the War of 1948. Nakba, which is the arabic word for catastrophe, is also used to describe the situation of Palestinians at the hands of the Israeli occupiers. At the heart of the catastrophe are the five million Palestinians currently living as refugees, the largest refugee population in the world.

Demonstrators chose Ofer prison as the site of their demonstration today, because five hundred Palestinian political prisoners are currently jailed there. Forty detainees in Ofer are currently on hunger strike to protest the Israeli practice of administrative detention, or imprisonment without formal charges. 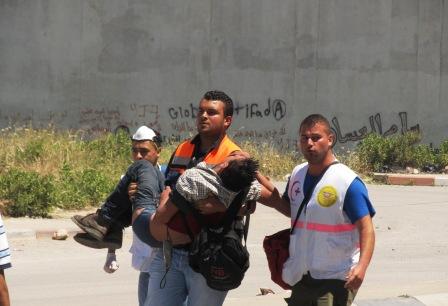 Medics evacuate a young boy who passed out from tear gas inhalation (photo by IWPS).