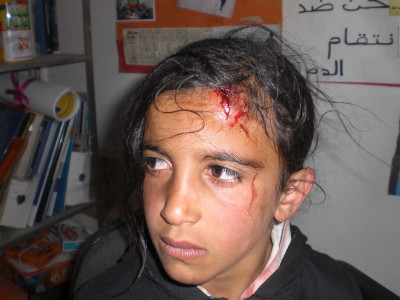 On Thursday April 24 at around 12 pm, two Israeli settlers coming with a quad-bike from the illegal outpost of Havat Ma’on attacked with stones four

Palestinian children and the mother of three of them, as they were returning from school to their homes in the villages of Tuba and Maghayir Al Abeed. A seven year old girl child was hit by a stone and fell while attempting to run away, badly injuring her head. Her father, who witnessed the attack as he was harvesting his land situated on top of the Old Havat Ma’on hill, immediately brought her to the nearby village of At Tuwani, where an ambulance came to rescue her and bring her to the hospital.The girl required five stitches and is now resting at home with her family.  The five Palestinians were coming from the village of At Tuwani, where the children attend school, through the only path they can use without the military escort that everyday accompanies the children from Tuba and Maghayir Al Abeed on their way to and from school since 2004. On this path Palestinians cross the hill where the outpost of Havat Ma’on was situated before it was dismantled in 2000 and moved to Hill 833. Through this hill passes a paved road used by Israeli settlers as a hiking trail. The five Palestinians were attacked by two Israeli settlers who were riding with their quad-bike on this trail.Operation Dove has maintained an international presence in At Tuwani and the South Hebron Hills since 2004. 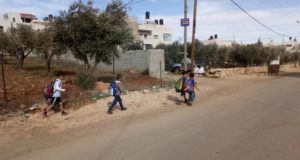 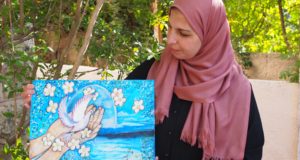